TURNING PAGES: THE SECRET OF THE GOLDEN FLOWER by CAROLINE STELLINGS

The second "episode" in the Nicki Haddon mysteries continues Chinese-born heroine Yu Fin's adventures with MI6, the FBI, and other super secret agencies that this sixteen-year-old manages to infiltrate and outthink.

Summary: Since her involvement in the Ming vase case crossed her path with law enforcement agencies in Canada, Nicki's been recruited and sent to London for training. Her not-a-butler friend, Fenwick, has set her up to live outside of London with his sister, Emma -- a middle aged punk rocker with a band who pretty much hates her on sight. He can't go with her - Fenwick is on the trail of a theft from Buckingham Palace, and looking for a book that's missing... about a certain golden flower.

Nicki's in an uncomfortable situation that gets worse -- at the airport she was photographed and followed. The guy who followed her turns out to be a gang member who peers into Emma's windows. And the spy school Nicki was looking forward to turns out to be odd as well -- Nicki runs into one of her suspicious-acting instructors at a museum where a docent preparing to speak on the history of the opium trade is found poisoned. Nicki fears her teacher has been compromised by drug dealers... and maybe it all ties to that book no one can find. It's time to pull out her Fu Yin persona and get to work. 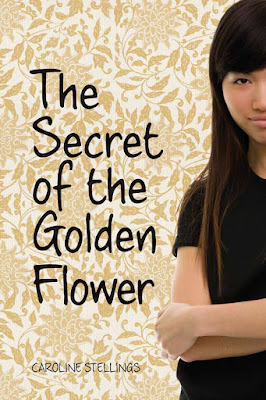 Peaks: Nicki Haddon's wealthy upbringing gives her a great many advantages, and though she doesn't know a great deal, she's flexible and finds out. She is also always finding ways to help the people she sees as overlooked; this time it's a punk rock band. Nicki's merely supposed to be a student in this book, but is dragged away on a fast-paced, over-the-top adventure which includes Buckingham Palace, Balmoral Castle, a stuffy butler, opium poppies, East End London rhyming slang, and general comic-book style insanity. This series is like popcorn, and readers seeking diversion will return for another quick read.

I had a little trouble suspending disbelief about some of the plot elements in the novel, but I can see this being enjoyable for kids looking for wish-fulfillment reading. Adults may find it unlikely that a sixteen-year-old girl, even a smart one, would be taken seriously by various international spy agencies to the point of impressing them and being the only one on hand to save the day!

Valleys: The difficulties of plotting a mystery include suspicious adults, but Nicki meets few, since her caretaker is in a punk band and she fends largely for herself. Nicki even without her Fu Yin persona is incompletely characterized and remains mildly mysterious. Readers may find it hard to warm up to her, as the narrative voice explains a lot of her actions and emotions but the novel lacks emotional resonance. Some of the relationships in the novel seemed rushed and underdeveloped, and Nicki's search for her birth parents, which should be personal enough for her to keep close to her heart, and to endear her to the reader, she seems afraid to tackle. Readers may wonder why she isn't more direct, talks to her parents about what she wants and needs, and uses their prodigious money and reach to find out what she can. While the transracial adoption element keeps the novel interesting, emotional development is shortchanged in favor of action in the plot, as we are told and not shown who Nicki is, what she cares about, and what drives her.

Conclusion: Like a compact Chinese superhero, Nicki outthinks, outfights and outsmarts the villains around her in this over-the-top standalone sequel.


I received my copy of this book courtesy of the publisher. You can find THE SECRET OF THE GOLDEN FLOWER by Caroline Stellings at an online e-tailer, or at a real life, independent bookstore near you!

Posted by tanita✿davis at 12:13 AM
Labels: Canadian, Class and Identity in YA literature, Middle Grade, Mystery, Realistic Fiction, TSD Review