Thursday Review: THE WAY BACK FROM BROKEN by Amber J. Keyser 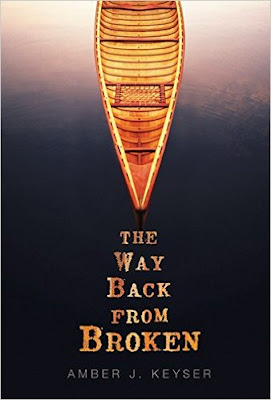 Summary: Full disclosure: Amber Keyser is an author I met at a past KidLitCon; her editor Andrew Karre at Carolrhoda Lab I also know from KidLitCon (a different one) and I'm in contact with both of them online. They sent me my review copy of The Way Back from Broken.

OK, business now out of the way.

When I sat down to think about it, there really aren't that many "guy books" that deal with emotional issues. There are general "issue books" with male protagonists, but compared to the number of books with female protags that place emotional recovery front and center? The guy books aren't as numerous, that's for sure. The Way Back from Broken is one of those rare books with a male main character that foregrounds grief and recovery, friendship and love, and does it in an authentic and believable way, because yes, teenage boys deal with their emotions differently, but that doesn't mean they don't HAVE them.

Rakmen Cannon, the protagonist, is a good kid who's had bad things happen to him. He's still recovering from the grief of his baby sister's accidental death, his parents' marriage is crumbling before his very eyes, and he has to suffer the indignity of going to art therapy in a basement with a bunch of other grieving kids while his mom goes to the mother's support group upstairs. Things get even worse when ten-year-old Jacey, the new girl at art therapy, latches onto him and seems to think he can help her somehow. Oh, and Jacey's mom is one of Rakmen's teachers at school.

Rakmen has no idea what he could possibly do to help. He doesn't even want to talk about his own feelings; what can he do for a ten-year-old girl? And yet…she seems to look up to him. Almost like a brother. He hasn't had that feeling in a long time, but he's forced to confront it when his mom sends him along with Jacey and her mother on a summer wilderness trip. It's when the three of them leave the cabin and go au large--French Canadian for "on walkabout"—with just their packs and canoes, that they are forced to really start depending on one another…and that's when the walls start coming down.

Peaks: Besides what I already mentioned about how it's great to have another book for boys (and girls) that delves into the inevitability of both grief and recovery, another thing I found noteworthy about this book is that the protagonist Rakmen is of mixed race—he has a black father and Latina mother—and it's clearly portrayed but also just as clearly Not An Issue. It just is, and Rakmen is who he is, and there are a few ramifications there, but this isn't the central plot point by any means. (Did you hear that? His race doesn't define him! He is a Complex Individual!) That was really well done, in my opinion. And the girl he kind of likes, Molly—a girl in his support group—happens to be white, but that isn't a Thing. What hangs over them isn't race, but sadness.

Ironically, it's what they share that keeps them isolated. Being able to open up can't just be done on command, though, and in this case, it takes an experience that gets Rakmen outside his own head. I've seen this to be true so often, and I like that it happens in this story. I also like that everything isn't tied up in a neat bow at the end, but is realistically a bit messy. Progress is made, there is hope, but you can't bring back the dead, and some things can't ever be quite healed.

Valleys: I have to admit, I wanted this to be a bit more of a survival story, when they got to their journey au large in the Canadian wilderness. There are scary moments and physical danger, but I never quite felt that life-threatening terror that I was, for some reason, expecting. I don't know that it's a problem with the book so much as with my expectations, though. And there's certainly enough emotional tribulation to go around without having to take their physical endurance to its limits.

Conclusion: This is the kind of story I'd put in the hands of a Chris Crutcher fan—because that's whose books this reminds me of. It's about love and loss and that elusive "learning to be a man" that can be so difficult and confusing, especially when you feel like you're supposed to control or hide your emotions. It's a really heartfelt story, with believably flawed characters, including the adults. This was a debut, and I look forward to reading more of the author's books in the future.

I received my copy of this book courtesy of the author and publisher. You can find THE WAY BACK FROM BROKEN by Amber J. Keyser at an online e-tailer, or at a real life, independent bookstore near you!
Posted by Sarah Stevenson at 2:38 PM
Labels: AF, Diversity, Grief, Guy Appeal, Problem Novels, Realistic Fiction, Reviews

The cover is just beautiful. Glad to see this one.