Thursday Review: THE DIVINE by A. Hanuka, T. Hanuka, and B. Lavie 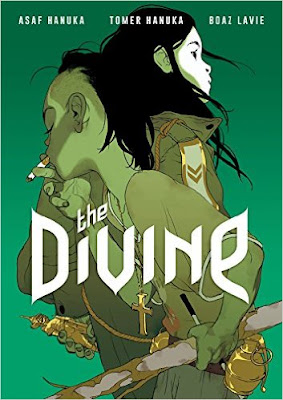 Summary: This story of ancient spirits in a war-torn Southeast Asian country—the fictional land of Quanlom—is a fast read, saturated with the brutality of war's aftermath and its effects on children who no longer are given the luxury of a real childhood. I'd deem it a crossover title in terms of content and characters both; the story's protagonist here is Mark, an explosives expert with a pregnant wife and a solid job, a steady life. That is, until his old buddy Jason offers him a top-secret military contract in Quanlom, rigging up some explosives. The money sounds too good to be true…and then Mark discovers that not only does he have to contend with the moral and ethical horror of child soldiers, he also must face a land imbued with—and protected by—ancient spirits… and then decide whose side he is really on.

A quick disclaimer for adult language with this one—there are a few instances of strong language, because one of the main characters is a military-type guy with a monster attitude. That's the main reason why I'd consider this a crossover title, good for YA and above but certainly not below unless you want kids to ask uncomfortable questions about the C-word (the female one). As a story of war, it's also got its share of violence.

Peaks: I love the fact that this story was actually inspired by a real-life photograph of two twelve-year-old twins from East Burma who had fought to defend their land by leading an army of refugees. Their story was surrounded by legends, but the kids were (and are) real, and the photo exists (it's reprinted at the end of the book). It's kind of a what-if-the-legends-were-real story, and it's also a painful reminder of the realities of what went on in Southeast Asia, the ground still seeded with land mines and permeated with past violence. It's a history that's easy to forget or ignore, and stories like this help us remember.

Valleys: As mentioned above, this one isn't for every reader, due to violent content and language. That aside, I found myself wanting to know more about the mythology—there's a dragon-like creature, his soldiers that look like Buddhist tomb guardian figures, but not much in the way of background culture. Nevertheless, the art in those sections is atmospherically rendered, and does reward those with some existing understanding of the visual references.

Conclusion: This is a great one for guy readers, and particularly, I think, reluctant guy readers. It's fast-paced and action-packed, with cool supernatural elements and video-game violence. From a moral standpoint, the ending was also quite satisfying. And if it gets readers interested in the story behind the story, so much the better.

I received my copy of this book courtesy of the publisher, First Second. You can find THE DIVINE by Asaf Hanuka, Tomer Hanuka, and Boaz Lavie at an online e-tailer, or at a real life, independent bookstore near you!
Posted by Sarah Stevenson at 11:37 AM
Labels: AF, Fantasy/Sci-Fi, Graphic Novels, Guy Appeal, Magical Realism, Reviews