Turning Pages: GHOST HAND, by Ripley Patton *(Book One of the PSS Chronicles)

The adventures I have, when I randomly buy, pick up, or otherwise gank books! Once again, I am SUPER EXCITED because I've found another Cybils contender so early in the year. I'm a Luddite at heart, and I have had access to ereaders for years, but I've ... *cough, mumble* ignored them. Until I had to use them for the Cybils. As it ages, self-publishing has gotten better - people are working harder, using their writing groups, and hiring copy editors or using spell-check. E-publishing has emerged as something to be taken seriously, and kudos to the small presses who specialize in helping authors bring their rare gems to light.

Reader Gut Reaction: This book is one of those rare gems. It has adventure. It has humor. It has the most organically developing pre-romance I've seen in a long while. It has a diverse cast of characters. It has heart. It also has Kickstarter backing, which means quite a few more people than me thought that this would be an awesome, kickin' series, and I think they're right.

Concerning Character: First, there's PSS, a character all on its own. It's an acronym standing for "Psyche Sans Soma," a rare birth defect that no one quite understands. Babies born with PSS have bits and pieces missing that are replaced by a mass of ethereal blue energy. During the setting of this novel, that's ...known. Not exactly normal, but it's like going to school with a kid who has a wine-colored birthmark or Heterochromia - people have that, and it's just life.

Olivia Black is a high school senior with PSS, and, with the exception of her awesome bestie, Emma, her life kind of sucks. Not because of the disorder, although it has its annoyances, mainly with people staring-but-pretending-not-to-stare, but because her mother is completely freaked out about it. Ever since her father died of cancer, her relationship with her mother has completely unspooled. Which is fine - Olivia's good with being alone and silent, which she sometimes does even with she's with Emma, because Emma gets her. (And how precious is THAT to the introvert?) Meanwhile, Olivia's psychologist mother interprets her silence and aloofness as all kinds of things. Oh, yeah, she also "interprets" Olivia's black clothing and her enjoyment of climbing around the hills of the cemetery to talk to her Dad. According to her mother, Olivia is "obsessed" with Death, over dramatic, and practicing emotional blackmail. Whether the author meant to make some personal observations about the subjectivity of psychology or foreshadow something about her mother's involvement with the plot, only time will tell - this is Book 1, after all.

The third important character is Marcus, a newly transferred senior at Olivia's school. What you most need to know about him is that he's hot, he's observant, and he keeps his head in a situation. Like, when Olivia's "ghost hand," as she calls it, suddenly flips out and reaches out to the girl in front of her in school... and then, through the girl in front of her at school... and then yanks something out. And, then Marcus practices emotional blackmail. And lying. And attempted kidnapping. Olivia's kind of through with him, despite the fact that she also wants to lick him. He's pushy and he swears he's trying to help her, but clearly? He wants something from her, and she absolutely cannot trust him. Until, a stranger follows her from her best friend, Emma's house, to the cemetery. And then, when she runs home, the house burns down...

This adventure begins with a mild and rapidly ratcheting sense of "Oh no" that keeps the stakes high, and the action quick-paced. I really and truly think I need to figure out a little flag or something to remind myself for later that this is a Cybils contender - first published Nov. 2012 - and I'd love to find more readers for it. AND! Today it's on $.99 sale at Amazon, so hurry if you have an e-reading device - it looks like it's available for multiple platforms. 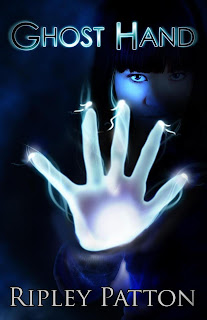 Authorial Asides: Aaaand, yanked from her website: Ripley Patton is an American writer of fiction, and a student and purveyor of myth. She is in love with storytelling in all of its various forms, though with the speculative forms most of all and YA in particular. She has a fascination with such topics and themes as death, sex, gender, female empowerment, magic, science, paganism, and anything that makes her laugh.

Ripley also received the Sir Julius Vogel Award 2011 for services to Science Fiction, Fantasy and Horror for founding SpecFicNZ, the national association for writers of speculative fiction in and from New Zealand, where she lived for five years. She now lives in Portland, Oregon and writes novels in her head while training to hike the PCT, a 2,650 mile trail that runs from Mexico to Canada.

What they didn't mention: Ripley is a really cool name. And, another book of hers came out in March. Must find.

Cover Chatter: Well, gosh, but I love an informative website. From the author's site:"The cover of Ghost Hand was designed by Kura Carpenter of Kura Carpenter Design. Kura lives in New Zealand, and I hope she will be designing the cover for books 2 and 3 of the series because she is really fun to work with and good at what she does." She is good at what she does. I love the hand. I love the neon-looking letters that make up the title - some filled with ethereal energy, some empty. I love that you can nearly see the zing of electricity, the attraction of one, beguiling eye peeping out of the dark... I also love the tie-in. also There's a piece of artwork in the book which is a lot like the cover - which is the kind of thing I used to love to find in books, something in them that went along with the cover. The designer read the book specs, and designed accordingly. Imagine that.

You can find GHOST HAND by Ripley Patton @ Amazon, so check it out!

Tanita,
I'm so glad you loved Ghost Hand. Thanks for the amazing review. It had me laughing and feeling proud, and thanks for turning me on to the Cybils. I think I can remember to remind you concerning them in October:)

@Ripley: I am open to the reminder! I really enjoyed this, thank you!

Wow, this one definitely sounds unusual and intriguing. I'll keep it on my radar! You are SO good at finding the self-pubbed gems.

It does sound awfully good....but I don't have an ereader, and I am trying really hard not to buy any books for the moment...

Although I just bought Jenny Davidson's newest book because I was buying my mama a birthday present and needed the free shipping and so also bought Primates. But were I to buy a book again in the future, this might be it because I have now put the paperback version in my Amazon shopping cart. And Aquafortis' new book too.

But anyway it sounds really good.

I have to admit that I've become rather enamored of reading on my iPad mini. Though I still read plenty of paper books, I've mostly set aside my old-school Kindle in favor of the iPad, when it comes to ebooks, because that's the platform I can use with my library's ebook lending service. AND I downloaded Kindle for iPad. :)