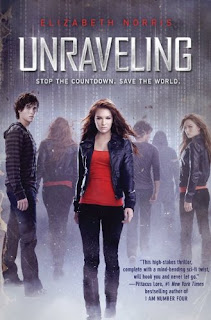 Reader Gut Reaction: Janelle Tenner was supposed to be dead. For a few minutes, she WAS. And then…she wasn't. And her life since then is irrevocably different. Before: beach lifeguard, academic powerhouse, popular hot boyfriend, not much to worry about except taking care of her younger brother and staying out of their bipolar mom's way. Then, one day, she's hit by a car while walking on the side of the road. The car comes out of nowhere, and then she died…but she sees school stoner Ben Michaels just before she impossibly wakes up again. Problem is, her story's too unbelievable for words. Even her dad, who works for the FBI, doesn't think there's anything weird about it.

Not at first, anyway. On Dad's side of the story, there's a case of mysterious deaths from radiation poisoning, and the more Janelle snoops into her dad's business, the more she thinks there's a connection. But—of course—they don't have much time to figure any of it out. Because a clock is counting down the days and minutes, and the outcome is surely something terrible. Whose countdown, and to what? And how does it all fit together? I can't say much more without spoilers, but I will say that I'm surprised I hadn't heard anything about this one before. Definitely up my alley, and while there were a few bumps here and there with respect to the writing and why the character made some of the choices she did, I was pleasantly surprised overall.

Concerning Character: Janelle, the protagonist, is mature for her years. And that's no surprise, since her mother's bipolar episodes make her so nonfunctional that Janelle has to be mom to the family. It also raises the stakes quite nicely—after all, her life is currently set in perfect balance, more or less. And when something disrupts that balance, everything else is affected. While she is appealingly wry, mature, and together in many ways, in others she can't help but follow her heart and her instincts, and of course it's all of this in combination that enables her to solve the mystery of her near-death experience and her dad's increasingly strange case.

As for the new man in her life, Ben, he's one of those guys who you never really notice or think about, although he's one of the few in his stoner group who shares a few academic classes with her. He's quiet but surprisingly smart, and of course he's hiding a few secrets of his own. Meet Appealing Mysterious Loner…While there are clear character "types" in this book, Janelle's narrative voice is clear and lively; she's smart enough to bring together in the end what could a bunch of disparate, seemingly unrelated plot threads, and to find her balance again.

Recommended for Fans Of...: Are you a geek for stuff like the X-Files, Heroes, Doctor Who, or basically anything involving a slightly supernatural sci-fi mystery? You might like this one.

Themes & Things: While this one's fairly plot-driven, it does pose some intriguing questions: What's more important, romantic love or love for your family? If you've lost everything you hold dear, what would you sacrifice to get it back? How much danger do you have to be in before you tell someone, and how can you know if they have your best interests at heart?

You can find Unraveling by Elizabeth Norris online, or at an independent bookstore near you!
Posted by Sarah Stevenson at 10:46 AM
Labels: AF, Fantasy/Sci-Fi, Reviews, Romance, Suspense

I believe I did read this one for the Cybils. Again - survival of the fittest, and the fact that there were "types" that were clearly labeled meant that while it was really intriguing, it didn't hold up against the sheer numbers we had this past year. Thanks for reviewing it - I just could NOT get to them all, when all was said/done.