This book is allegedly for MG. Well, my inner fifth grader is all kinds of happy right now, then. And my inner sophomore. And my Alleged Adultness. This is a Cybil potential, all right, straight up. It has heart-pounding adventure, right out of the gate. It has that wish-fulfillment kind of adventure. It has battle, death, and a desperate gamble by two populations for one planet ...

Oh, and a really annoying prank.

Reader Gut Reaction: You totally want to read this.

THIS is the book guaranteed to reach that elusive band of "reluctant readers." As a teacher, I learned that reluctant readers are simply those who haven't yet found what they want to read - once they like what they're reading, they're not reluctant. This book is for them - with illustrations, to further fuel their imaginations.

This book is also for that tribe of voracious readers, who hoover up a book and then moan that there's not a sequel on the bed next to them. So, they write fan fiction for two years, and become better writers, and more eager readers. Rabid Readers, this book is for you.

And, this book is for absolutely EVIL parents or camp counselors to read aloud during rest period, and make everyone WAIT for the next night or afternoon for the following chapters. Mwa-hahahah - *cough* - Ha!

Clearly written characters, with quick pacing, lots of action and technical detail. A little less character development than some might crave, but I found myself enjoying everything. This book is a big shiny E for Everyone.

Concerning Character: 13-year-old Mason Stark isn't really as much of a dork as he comes off at first. It's not actually his fault that what was meant to be The Great Chair Collapse of 2800 - an epic prank which included taking apart his sister's chair on the off-limits-to-cadets bridge of the Starship Egypt - coincides with the morning the world pretty much ends.

Who can predict planet-vanishing in advance? No one, right? So, while Mason looks like a git with all the pranking, and he deserves his stint in the brig, he also deserves to get out. Like most people who pull pranks, Mason is smart. Pranksters make some of the best tacticians, EVER. They figure out how to do a sneaky thing, and they get it done. Mason is awesome, because he's big enough - most of the time - to know when he's beaten, to apologize, like when the Captain's son, Tom, punches him in the face after another of his pranks ten days before. Mason knows when to let someone else take charge -- but he's also charismatic enough - and good enough at hiding his fear - to take charge of others, and to get others to work with him. Which becomes kind of important, when the Egypt, the ship on which he and his fellow cadets are passengers to return to school, is attacked and boarded by the Tremists, terrifying aliens who wear full reflective face masks and who may or may not be vampyres. Or werewolves. Or magicians. No one's ever seen them out of uniform to say for sure what they even look like, but they're the boogeymen to end all boogeymen. 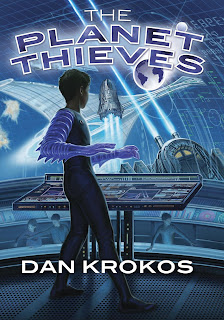 One thing everyone knows for sure is that the Tremists are exterminators, and have taken out far too many of Earth Space Command's forces, including Mason and Lt. Commander Susan Stark's parents, down on the planet's surface years ago, in what history now knows as First Attack. Until Earth, stretched to its limit with a population of eighteen billion had found and began to try and colonize a new planet called Nori-Blue, no one had even ever HEARD of the Tremist. Mason Stark is beginning to wish he hadn't, either... but wishing cuts no dice when you're a Stark. Starks lead. And so, Mason sucks it up and... takes the reader on a memorable adventure that will leave them whining about that sequel.

Recommended for Fans Of...: MOTHERSHIP by Martin Leicht & Isla Neil; INSIGNIA, by S.J. Kincaid; ENDERS GAME, Orson Scott Card; LOSERS IN SPACE, by John Barnes, and AND ALL THE STARS, by Andrea K. Höst and others.

Cover Chatter: Tor explained a lot about the cover, and interviews with book designers are so nice. Read. Enjoy. There are interior illustrations in this book that are also excellent.

After reading the novel, the weird gauntlets Mason is wearing will make SO much more sense. I thought he was ... slightly alien before I read the novel. Now I know he's only... well... just read the book.

Authorial Asides: This isn't Dan Krokos' first book, it's his second. He apparently was a gas station attendant for nine years to put himself through school, and now he's a full-time writer, which is awesome. Here's hoping for more from him, SOON.


On May 21, you can find THE PLANET THIEVES by Dan Krokos online, or at an independent bookstore near you!

I heard about this and the cover discussion. It sounds cool. I think I already have this on my TBR list.

@ Lin: I liked it more than I expected to - which was exciting!