Oh, my gosh, this was a hard book to review. Maybe because I kept kind of having to shudder, because I knew what was going to happen - what had to happen. I mean, hello, title. It's clearly there. The. Summer. Prince. People who read enough mythology - both Greek and English - and soak it up through international fairy tales know the score - the minute you put a season to some royal son's name, you've doomed him to die as a sacrifice at harvest time.

What made this a good book to review? The language - the nuanced sentence structure, the realization that, though this novel is directed to the YA market, that it will cross to the new adult and adult markets with relative ease. The author doesn't water anything down - not vocabulary, not theme, not the complicated cat's cradle of desire and reaction - it's all there, real life, in all its permutations. There are no easy explanations - no definitions, no hand-holding. Further, the book defies easy categorization - it's neither dystopian nor utopian, it's just... kind of post-apocalyptic cultural continuation. It's a hopeful, disturbing, haunting, book about the things we take as survival, and what changes them - and us.

And, it's about love - power - sacrifice, and endings. It kept me up late, and gave me weird dreams, because, in the end, it's kind of a book about everything.

Reader Gut Reaction: As I said, the idea of a summer prince wasn't a happy one - that's typically an Arthurian sort of fey and faeries thing, and after Holly Black and Melissa Marr, I'm pretty happy to leave that urban fey thing along. But! I took a chance that this was by an author whose work I respect, and boy howdy am I glad. And may I just say again that I so appreciate SFF authors of color writing for younger readers? I am truly excited.

This novel also touches some on the future of sexuality - with ideas of family and gender painted on a changing canvas. The author knocks cockeyed some perceptions, and will hopefully leave readers not only longing for new dialogue on that topic in the future, but seeking ways to make it happen now.

Concerning Character: June is quicksilver. For all that she's named after a fairly benign, sweet month of sunshine and loving promises, she's a heady, impetuous fireball - chomping at the bit to live life, dance hard, play hard, and defy her mothers at every turn. Her live-wire personality is in part because of the culture in which she lives - the pyramid of Palmares Tres, build with Japanese technology after nuclear winter rendered much of the land water-covered, inhospitable, or radioactive desert. Four hundred years into this new future of what was Brazil, the country is run by red-turbaned Aunties - because was it not man's foolishness that plunged the world into war? - and as a sacrifice to the land, and to the traditions, and to the gods, perhaps, every five years a young summer king is crowned. He is chosen in the spring, despite the summery name, and it is this king who dances the season away - a god of virility, sexuality, and charisma. It is he who chooses the next queen to reign. Though he has to die, the summer king's power is the embodiment of the hope of the wakas or young people of Palmares; he embodies the strength of its grandes, too, like tenacious tropical vines, clinging to life, and rising up again, even after nearly being wiped from the face of the earth.

Youth is important in Palmares - but not in the way you might think. Their ties with the Tokyo pyramids have benefited the Palmares folk greatly - they now have tech and body mods which allow them to live for up to three hundred years. This causes a lot of shudders in the waka - who in their right mind wants to live that long? Their lengthened childhood and adolescence causes them to chafe at the restrictions the Auntie place - restrictions on technology, social and societal restrictions on what behaviors a young person can do - there aren't many ways in which to distinguish oneself in such a society. There's nothing to strive for, when some of the Aunties have been in power for fifty years or more. Every other goal is so far from their grasp... and so young men dream of being summer kings, and young girls dream of being their consorts.

It's not much, but sometimes, a little can be everything.

Palmares is a sophisticated city, in its way - the city has AI which moves elevators up and down the pyramid levels - the top is where the Aunties live, including "the Auntie of Aunties," the Queen. The bottom is where the poor workers live - people with no connections, whose tech is spotty, and who take care of the algae pits which give oxygen to the massive living structure which supports life in this place. Social strata follows the levels of the pyramid - the Aunties don't like to think about the ones who live below, who are dark - so dark-skinned, who are poor, and dress in the clothes that remind them that once in their historical past, the people of Palmares were slaves. Unbelievably, there's a summer prince from the bottom tier of Palmares Tres society in the running this year for king - a gorgeous dark boy named Enki. June, together with her very best friend, Gil, is going to help Enki win.

And Enki... well, Enki is going to change everything.

Themes & Things: Oh, the themes, we have them. Parental love, when your mother might live forever, might also mean that you can still fight with her about things that happened years ago, like they happened yesterday. How does one go about remembering? Forgetting? There's an exploration of death and grieving in a society pressing for ever greater longevity - which feeds into the themes of the importance of the dreams of our youth, and what makes our growing-up years vital. 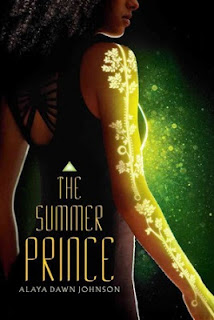 June is an artist. She expresses her art in her body - from her hair to the bodymod lights embedded in her skin. She draws, she paints, but mostly, June wants to live as art... but is addiction to the spectacle actually art? What is art in a culture trying to forget the past, and clinging to the present so hard that it almost denies its children a future...? There is a journey to our art - a process - and it is deeply personal, and sometimes torturous, as we see in June's case.

The theme of revolution - of who has the power to change things, and of what gives us the knowledge to needs change, and the courage to take the first steps -- there are so many amazing thematic kick-off points for conversation right here. This is a multi-layered novel that offers so much to the reader - readers who can truly engage are going to find a lot here.

NPR has a bit from the first chapter of this book, and don't miss the Q&A with the author.

Cover Chatter: When a character in a novel has such a hugely DEFINING thing like a tattoo - or, heck, even hair color, a specific weight or height or birthmark - you kind of expect to see it on the cover. That doesn't always happen. FORTUNATELY, this novel had a great book designer. You get a sense of tech - movement - dance, even, in the dark background, which gives movement and color to the lights creeping across June's skin - especially visible when the lights go out in Palmares Tres. No face, but a suggestion of crinkled hair and brown skin - lots to like, here. I wonder if there will be a different cover for the paperback - eventually she got pretty daring with those lights...

Authorial Asides: This is Alaya Dawn Johnson's first book for young adults - but not by any means her first book. She was featured in the YA anthology, Zombies vs. Unicorns, and also has published short stories just about everywhere. Total bibliography list here.


FTC: This is an unsolicited review, ARC courtesy of NetGalley.

After March 1st, you can find THE SUMMER PRINCE by Alaya Dawn Johnson online, or at an independent bookstore near you!

ok, me will read! (someday) (whimpers at the thought of all the books to be read)

viz dying kings, have you ever read The King Must Die, by Mary Renault? Please do, if you haven't....

Haven't read that one yet... something about the title might have dissuaded me!!! However, I will give it a go...

I've been seeing a lot of buzz about this one on the web here and there, and after reading your review I have to say it sounds amazing. (Even with foreknowledge of impending doom!)

People either love it, or hate it. I've seen on Goodreads a whole lot of people who claim that it's hard to understand, and they complain that the Portuguese words aren't translated, etc.

And I think of siccing Micheline (from Mills, Micheline Aharonian Marcom) on them, and having her give them the little rant about LAZY READERS. It is an ear-blistering rant.

I think you will enjoy this book because you aren't lazy. It doesn't reach down, it pulls you up.