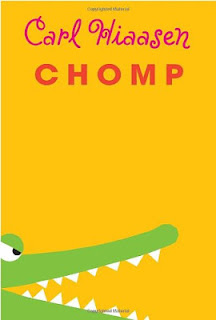 Reader Gut Reaction: I don't post about too many middle grade titles—to be perfectly honest, I don't read as many MG books as I do YA—so it's kind of ironic that I read this book a couple of weeks ago and then realized I should wait to post about it, because it was a Cybils finalist this year and I'm the Cybils blog editor, conflict of interest, and so on. Anyway, one of the MG authors I've really been enjoying is Carl Hiaasen, who invests all of his mysteries with a larger-than-life hilariousness that just really works for me.

His latest, Chomp, has some elements that are even sillier than normal—for one, the main character is a boy named Wahoo and his friend is a girl named Tuna. Tuna, on the lam from her bad-news dad, decides to join Wahoo and his dad on a weekend job. The job's a bit unusual…Wahoo's dad is an animal wrangler, and he's supposed to help reality TV star Derek Badger—a phony in every way—with his "survival" program being filmed in the Everglades. But then Derek Badger goes missing and all hell breaks loose.

Concerning Character: The main characters in Chomp are believable and down to earth, and for me that's the cherry on top—as outlandish as Derek Badger is, as ridiculous and over-the-top as some of the action is, we get to see it through the eyes of perfectly reasonable people like Wahoo, his dad, and Tuna (and even Derek's long-suffering production assistant Raven). Though they have their quirks (what kind of crazy person grows up to be an animal wrangler? you find out over the course of the story, don't worry), there is plenty of realism here, and the vivid and fully-realized characters really bring it all to life.

Recommended for Fans Of...: Middle-grade novels with a lot of quirky humor, like, say, Tom Angleberger's The Strange Case of Origami Yoda. (I'm looking back and realizing that "quirky humor" describes about 90% of the MG novels I review on this blog…)

Themes & Things: What I like about the humor in this one is how it offsets some of the more serious issues like Wahoo's family's money troubles and Tuna's terrifying dad. At the same time, the author strikes a balance so that the heavier themes aren't trivialized. It all takes place against a light mystery backdrop, in which the mystery is the disappearance of Derek Badger, but the reader gets the vicarious enjoyment of watching Mr. Badger's side of the story while Wahoo & co. try to locate him in the swampland. So the reader ends up being a bit more of a spectator for all the havoc, and that's fitting, given that the story involves a reality TV show. Another fun and funny one from Hiaasen. Honestly, I can't see why these wouldn't be great crossover reads for YA and adult readers, too.

Authorial Asides: I just now learned on Amazon that Carl Hiaasen is an award-winning journalist. Who knew? (Obviously not me.)

You can find CHOMP by Carl Hiaasen online, or at an independent bookstore near you!
Posted by Sarah Stevenson at 8:29 PM
Labels: Adventure, AF, Guy Appeal, Humor, Middle Grade, Mystery, Reviews