Well, this one has a nice, succinct title, doesn't it? FREAKS. Misfits. Mutants. This is a strangely compelling but freakish little work, first published in Britain in 2011, and winner of The Times/Chicken House Publishing Children’s Fiction Competition 2010. FREAKS is surprising and adventurous, and... simply unlike a lot of other books I've read recently.

Reader Gut Reaction: I was surprised that this book is marketed to middle graders, but the majority of grubby Victorian novels which I've really enjoyed have been directed toward younger readers. The city itself comes across fabulously - the descriptions of the absolute stench, the mudlarks, the weirdness of Victorian London come through beautifully. Characterizations as a whole work beautifully, and the freakish heroes are imbued with a sort of madcap adventuring spirit that enlivens the best of middle grade literature. And, truly, this book is as WEIRD as any kid could want. I mean, rats named after the apostles? And, a WOLF GIRL!? 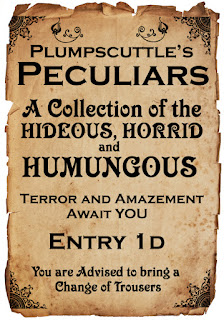 Concerning Character: It's just not every novel that has a narrator with hypertrichosis... but, this one does. And a polycephalic sheep. All of those things which really and truly "graced" Victorian sideshows are represented - an Asian "exotic" whose skill is dancing with sharp knives and throwing stars, a disgusting and very disturbing Monkeyboy, whose mad skills are sculpture with snot and earwax, a pipe-puffing old dame with her brilliant vermin, an incredibly ugly strong man... and the ringmaster, Mr. Plumpscuttle is the fattest, ugliest, and most awful smelling of them all.

Together, they are Plumpscuttle's Peculiars; hideous, horrid, and humongous. And with them, Sheba the wolf-girl, is tired of being stared at, poked, prodded and gasped over. Is this any kind of a life? She has faint memories, of a hot place, marble floors underfoot, and curtains blowing in the breeze. And a faraway Mama... somewhere... but none of that matters now. Her life is every night, the chair in the curtained room, striking a pose, holding it - fangs out, pink nose squinched, claws extended: a freak show. 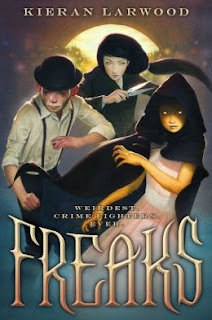 When one day, a mudlark girl wanders in - skiving off from her work mudlarking, skipping past the cove at the door, and not paying the entry fee - Sheba finds a friend, of sorts. She goes out of her way to be scary, flashing her fangs, drawing up her hands, the nails of which are like claws... and finds somebody impressed not with her hideousness, but with her skill. And, when Sheba finds out her young friend is in danger? Nothing will stop her trying to help. Not scary men with face tattoos, not clanking, wheezing mechanical automaton. Nothing. And the crew of Plumpscuttle's - rats and all - is right behind her.

Recommended for Fans Of...: THE EXTRAORDINARY AND UNUSUAL ADVENTURES OF HORATIO LYLE, by Catherine Webb; CORALINE, by Neil Gaiman; A DROWNED MAIDEN'S HAIR, by Laura Amy Schlitz; THE SPIDERWICK CHRONICLES, Holly Black and Tony DiTerlizzi; the THEODOSIA books, by Robin LaFevers 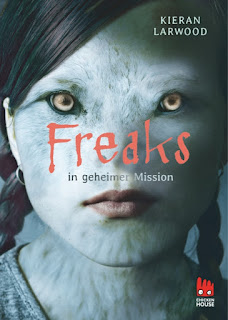 Cover Chatter: Right, then. Let's talk about these covers.

My very favorite one is the American one, which appears first in this post. I know, rare choice, when usually British book covers do a better job in presenting unusual faces. Sheba is our storyteller; Monkeyboy and Sister Moon are her equal partners in adventure. I like the way they're balanced on the American cover, equal versions of Weird Superhero. Having Monkeyboy so prominently displayed raises the chances of a boy picking up this book - it looks like it has action and adventure, does it not? Contrasted with the UK cover, which, in featuring Sister Moon out front and leaving Monkeyboy so far behind, not to mention almost obscuring Sheba entirely, makes FREAKS seem like yet another girly book, when usually middle grade fiction's strength is that it appeals more equally, and doesn't have that huge gender divide that YA seems to be unable to avoid. It's a real shame that they didn't more fully embrace the freakishness of the subject matter. 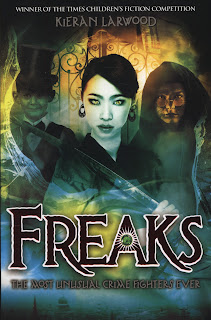 Now, I LIKE the German cover, just for it's weird factor, but I've got to admit that it's an unusual featuring of Sheba... the full lips make her look older than she is characterized, and also, a full-frontal stare isn't something we, as the reader get - only the sideshow participants. Sheba has very few memories of her "self" and never looks in a mirror. Also, obscuring her nose is a shame, as her sense of smell is one of the most wolf-y parts of her, and her pink lupine nose is a Thing. Still - full points for greatly, greatly weird, and I'm sure tons of kids will pick that up in Germany.

This is a fun book with a story that doesn't have neatly tied ends... leaving room for a sequel? This is a jumping off point for sure for curiosity about Victorian England, sideshows, and all sorts of "freaks." For more information about the human parts of the sideshow, check out Human Marvels, a site that separates the silly from the serious in terms of sideshow characters, and gives you the real names of the diseases from which most or at least some of the so-called "freaks" suffered.

FTC: This is an unsolicited review, book courtesy of NetGalley and the author. Poster and cover images courtesy of the author's site.

After March 1, 2013, you can find the American reprint of FREAKS by Kieran Larwood online, or at an independent bookstore near you!

This one sounds intriguing--I like the premise with the wolf girl making a friend from the outside world, and it sounds like the Victorian setting is a good choice.

I agree with you that the US cover is the best by far! The combination of weird and fun is perfect. That German cover is too creepy for me, though. It sort of looks like she doesn't even have a nose because of the placement of the text.