I think historical fiction needs better PR. People would read it, if they could truly believe that it would help them choke down dry centuries of dates and places, the things in history classes which traditionally trip people up. Well, history is just a STORY - and a darned interesting one, if you've got a good storyteller. A good storyteller ensure there's nothing dry in this historical fiction about China and California - there's superstition and tradition pitted against action, aggravation, and a fiery girl just bursting to BREAK OUT take it from being a tame story of old China to something more.

Reader Gut Reaction: My interest in this book kindled when I read the words Angel Island in the description. Unlike Ellis Island, of New York Harbor fame, Angel Island is tiny - a small, green jewel, just off the coast of San Francisco. It has no real amenities - you're out there with the fog and the shorebirds, and at night back in the day, it must have been darkdarkdark. Nowadays, the lights of the bridge come from afar, but on the island itself you're surrounded by nothing but the sound of the sea. It was, in the 1800's, a tiny Alcatraz - just as imprisoning as that edifice - for immigrants to San Francisco. As progress pushed California's prosperity into the stratosphere - prospecting, bridge-building, rail laying - people moved there in droves - everyone did. Free white males, escaped slaves, and Asian immigrants fleeing war and change and poverty in their own lands. Unfortunately, Manifest Destiny gave voice and form to the fears people had about Us against Them. Laws prohibiting the free immigration and peaceful lives of Asians, especially the Chinese, were passed to slow the tide of immigrants, and to prevent Them from Taking Our Jobs (sound familiar)? While the immigrants certainly knew the score, many Chinese back home believed that the hilly streets of San Francisco were indeed the Golden Mountain, and they desperately wanted to climb. Few of them knew what difficulties they would face - they prepared as best they could, but bribery, graft, and racism were against them. Many were detained at Angel Island for months and years, and many died there, rather than go home.

Concerning Character: Into this turbulent piece of history came a young woman called Jade Moon. Now, neither China nor America had much room for girls. The captains of industry were men; women were to be at home, minding the babies. Jade Moon's life was worse. Intelligent but unregarded, because of her birth, born under the sign of the Fire Horse as she was, she seems destined to be unable to mind, unable to please anyone but herself, unable to be anything but fiery, willful, stubborn, and wrong. Her mother dies bringing her into the world, no one bothers to try and educate her, her father and grandfather avoid speaking to her, and she's already seventeen - well past her prime marrying age. It's agreed that her only prospects are a middle-aged bricklayer. Except for the tough love of the family's servant, that's it - her whole life is contaminated by an accident of birth, the unluckiness clinging to her which took her mother from the world, lost her brother to death, and is assuring the death of her family line. Jade Moon is cursed, as any Fire Horse girl is cursed - and there's no getting around it.

Jade Moon desperately wants another chance. A do-over. A life. And when a stranger strolls into the village, waving the tantalizing hope of America beneath her father and grandfather's noses, it is Jade Moon who is most enticed. Though Sterling Promise is not in her father's house to offer her the trip, Jade decides she HAS TO get to America. It's imperative that she have her chance to live in this place where there is room enough for every kind of person, and where new beginnings are promised. She'll do whatever it takes to get there. Even marry the stranger. Even betray a trust. Even turn her back on her name, her family, her gender... because without this chance, there will be nothing left of this Fire Horse Girl but ashes. 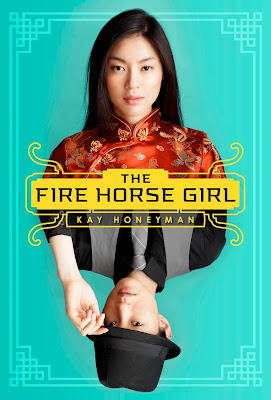 Recommended for Fans Of...: The Dragon's Child: A Story of Angel Island, by Laurence Yep and Dr. Kathleen S. Yep; Kai's Journey To Gold Mountain: An Angel Island Story, by Katrina Saltonstall Currier and Gabhor Utomo; Coolies, by Yin and Chris Soentpiet, Landed by Milly Lee and Yangsook Choi. There's not a lot of older YA fiction on Angel Island, but the Yep books are always good.

Themes & Things: Jade Moon is NOT entirely likeable. There are times when things happen, and the reader thinks, "Well, if you'd SHUT UP for once, or try to get along..." It's easy to blame her for her attitude, because she constantly thinks things like, "Well, I am a Fire Horse girl, I cannot help it." We're not used to thinking so fatalistically - that things are out of our hands because of circumstances of birth or gender or otherwise. The "American dream" so automatically instilled is much like the lyrics of the song New York - "If I can make it there, I can make it anywhere." We're given to understand that if we work hard, our dreams will come true.

This is not always true. When Jade Moon learns the tremendous amount of things against her as a woman, she quails... and then, she comes up with Plan B. If there's any thematic backbone to this story, it is this: confronted with absolute and utter failure, and the prospect of returning to her home as a fool, Jade Moon digs in and grabs her future. Kicking and scratching and stepping on the fallen bodies of those she's mown down, yes. There are definitely some ethical questions about what she does and how she gets by - but I think those questions are worth considering, as the reader asks themselves, "What would I give up? How far would I be able to go... to save myself?

Cover Chatter: Now, by now most people know me: not a fan of faces on book covers. HOWEVER. When we a.) have a chance to see the representation of a person of color, whom we don't often see, and b.) when the design is so very, very clever, we can do nothing but say TWO THUMBS UP! I love this cover. The freshness of it, the color, the subtlety. It's the type of thing that doesn't scream Dreary Historical Fiction Here and will actually encourage readers to yank it off the shelves. Well done, design team!


FTC: Unsolicited review, ARC via NetGalley, courtesy of the author.

You can find FIRE HORSE GIRL by Kay Honeyman online, or at an independent bookstore near you!

Posted by tanita✿davis at 2:27 PM
Labels: A Cybilsm?, Class and Identity in YA literature, Ethnicity and YA Literature, Historical Fiction, Multicultural Fiction, Mythology, Reviews

Definitely an eye-catching cover. And it sounds interesting. Rob's great-grandfather came through Angel Island, so it's intriguing on a personal level, too.