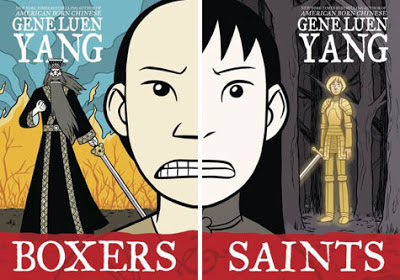 Wait a minute, didn't I say I never do the WAITING ON WEDNESDAY meme? Well, here I am again anyway, because J'ADORE GENE LUEN YANG. Seriously. We are hardcore ABC fans, we enjoyed a blog blast interview with Mr. Yang in 2007 before the National Book Award folks even knew how awesome he is. I will read anything the man draws/writes, which means I'm doubly excited about his historical foray into The Boxer Rebellion. Yes! Historical fiction and comics meet: perfect graphic novel content, to my mind.

So, a little backstory, if you don't remember: Screwed over completely by imperialism, occupied by Germans, stuck with a non-modern government that turned over their traditional faith temples to Catholic priests, the Chinese of that time really and truly wanted out of all foreign interference. A secret society called I-ho ch'üan or The Righteous and Harmonious Society of the Fist, began meeting for political rallies, and in late 1898, they struck -- killing thousands of non-Chinese and Chinese people, especially Catholic missionaries. Welll... killing missionaries never goes over well, because along with their God/gods the West always brings a big fat dose of ...well, Western-ness. Call it trade, goods, language, culture... and money. Anytime there's a disruption to the money, folks, blood will flow; that's what my history teacher always said.

Blood did indeed flow, and the summer of 1900 was a bad one in China. The secret society went mainstream when the Dowager Empress of the Ch'Ing Dynasty ordered all foreigners killed in June. Foreign ministers to China, whose families did not heed the social unrest died, but by August, American, British, Russian, French, Italian, and Japanese soldiers took Peking, and ended the alleged "rebellion."

And here's the story: a people divided. Choose their country, their nation, what some saw as their Chinese-ness, or stick with the new religion and culture they had come to know via the missionaries, who, while Western, weren't entirely all bad? Gene Yang chronicles the journey of two characters that goes in two very different directions... but is much the same, in a way. It is VERY worth your while to check out Wired's interview with Gene Yang, because there be sneaky peeks there, and a lot about the history and thought behind BOXERS and SAINTS from First:Second.

Hat tip, as usual, to the awesome that is Tor.com, who also included teaser excerpts!

Posted by tanita✿davis at 2:58 AM
Labels: Graphic Novels, TBR List, What We Do, World o' Blogs

Ooh, SOOOO excited about this one. You know I'll be requesting a review copy.

Reading this brought to mind a random memory of when we visited China (jeez, in 2003 already) and were brought by a park in Shanghai that used to have a sign reading "No dogs or Chinese allowed." So, yeah, some resentment of foreign influence...

Love me some Gene Yang. This is going on my list!