Oh, serendipitous books, you give me such joy. This book you might have missed, as it's a quietly self-published book available only on Amazon. It needs a bigger audience.

Reader Gut Reaction: There is NOTHING, and I mean NOTHING like just picking up a random library book or buying a cheap paperback, just to see what it's about, and hitting literary GOLD. From feeling a faint cautious distaste about these books, I am again becoming a BIG BELIEVER in the self-pubbed/indie, if the writer has a writing group, mad revision skills, and can write a story that isn't thinly veiled Mary Sue autobiography in the first place. I will say it clearly: this book is one I'd like to see nominated for the Cybils Award in MG SFF. It will be well able to compete with the others.

You Have Been Told.

Why did I pick this up? I liked the title - the WBI. Kind of like the MIB, only... not. I expected it to be slightly silly - and it is. It's also slightly hilarious, and will be a perfect autumn read for middle grade fantasy enthusiasts, and the older readers who read to them. The only teensy flaw in this book is that it stumbles into the "one twin is The Dumb One and the other is The Smart One" trope. However! Our savvy author ensures that the "dumb" twin saves the day, and more than makes up for his moments of lesser brilliance.

Concerning Character: Really, there are two main characters - Nate and Herman. When our story begins, they're already not doing what they're supposed to, which is not Come Straight Home After School. No, they're in front of a comic book shop. From the coffee shop next door comes a sharply dressed old woman in a heavy coat, balancing her cup of coffee and searching for her car. She's knocked over by a grumpy yuppie on a cellphone. As the boys hurry to help her, what happens next widens their eyes. Could that chair really have moved... and tripped that man, causing him to pour coffee all over himself?

If Mrs. Weatherby can do that, maybe she can do other things...

As it turns out Mrs. Weatherby is both more help and less than the boys envision. Stepping into her world leads the twins into meeting strange people with alter egos - or insects - sleuthing, betrayal, and lots of new vocabulary. Nate and Herman are smart and tech savvy and the technology and the details of this book are smart as well. They don't have Stupid Kiditis, which happens when authors create characters who do dumb things and you have to shout at the book, "NO, DON'T GO IN THERE ALONE!" They know when to duck authority, and when to ask for help -- usually just moments before the situation spirals ENTIRELY out of control.

Inasmuch as the twins are realistically drawn and quite funny, the adults, though funny, avoid caricature. There's a lot of respect given to older ladies in this book, because the post-AARP set kick buns and take names. It's satisfying, and occasionally surprising to the boys - which is as it should be. 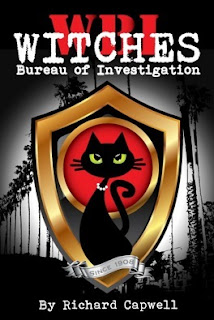 : Let's just take a moment to talk about the cover, here. The two main characters are boys who live near Hollywood. The pearl-wearing black cat on the cover is on a shield - a representative symbol of the witches. Does this look like a book marketed toward either boys or girls? The strong colors of red, black, and gray seem reasonably gender-neutral -- and I think either boys or girls would be eager to pick it up.

I admit that the cat gave me a feeling of quirky, funny, and sly humor - and, okay, it is reminiscent of the cat on the cover of Michele Jaffe's BAD KITTY, which is still one of my fave silly books. Pick this one up! It will really amuse you.

You can find WBI: WITCHES BUREAU OF INVESTIGATION by Richard Capwell at Amazon's ebook page. You don't need a Kindle to read it.

Thank you so much for this insightful review. My primary purpose is to entertain, and apparently I've done that. Richard Capwell.

I'm so glad you came by! Really, really enjoyed this book!

This does sound good! And you're right, the cover does a nice job of being gender-neutral. I like it.