Blog Tour Repost: THE OTHER NORMALS 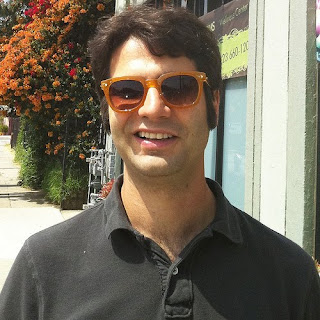 We've talked about role-playing games, or RPG and now we've segued into chatting about a gamer book by Ned Vizzini. This is a review repost in honor of Mr. Vizzini's blog tour, so enjoy again! And if you're here reading for the first time, welcome!

You know how you get sort of a book hangover because you've finished a novel, but don't want to leave the novel universe? THE OTHER NORMALS gave me that kind of feeling. Funnily enough, parts of his own world gave the main character, Perry, that feeling, too...

Reader Gut Reaction: I went into this book thinking that the word "normal" was going to be about mental health. I would guess that having read IT'S KIND OF A FUNNY STORY and BE MORE CHILL would have given me that misleading assumption. It's not about mental health - well, not in a possibly-you-should-be-institutionalized kind of way. It's about mental health in that it's a maybe-if-I-do-this-I-can-avoid-that sort of way, which is the way a lot of people approach reading or gaming - as an escape. Of course, sometimes with life, there's no escape...

Concerning Character: Perry - or, really, Peregrine - Eckert is kind of a geek. He's a muscle-free, style-less and relatively charm-free braniac who can be counted on to not only say the wrong thing at the wrong time, but to glaze over and stare when wits -- or even just a response -- are required. Partially it's adolescence - hormonal befuddlement happens to everyone - but partially it's because he's kind of living in the Twilight Zone Family - his people are nuts. His brother's constantly loaded, his parents, now divorced, speak solely to each other via their divorce lawyers, and, oh, yeah, they've hooked up with those lawyers. Classy, no? So, issues, ya dig. ISSUES.

As I said, a lot of Perry's geekitude is not his fault, and it's easy to cut him some slack when all he wants to do is disappear into Creatures & Caverns, this super-dorky RPG. However, as much pain as he deals with - bullies at school and brush-offs at home - he makes things worse with his constant escapism. He CAN'T relate to the world anymore - he just doesn't... get it. He's a gamer's gamer, and if it doesn't have sixteen-sided dice and leveling-up and rules, well... Eventually, his parents tune out of their narcissistic haze long enough to send him to realize he should have some fresh air and socialization skills, so off he goes to a camp where he's stripped of his dice and forced to interact with reality.

Good thing escapism is his superpower. There's a bunch of bullies, an attractive girl, and this guy with a tail. He's stumbled into the world of The Other Normals, and suddenly has a lot going on he'd like to avoid... 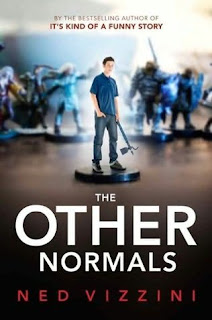 Recommended for Fans Of...: HEIR APPARENT, by Vivian Vande Velde, DUPLICATE, by Cherry Cheva, DANGEROUS REALITY, by Malorie Blackman and MY FAVORITE BAND DOES NOT EXIST, by Robert T. Jeschonek

Themes & Things: I think the title of this book could be "Dude, Just Deal," because a lot of Perry's problems could have been avoided if he'd tried to relate to real life as... real life. Unfortunately, not everything can be solved by rolling dice and deciding you're a wizard with 9th-level powers. The theme of facing issues and grappling with them actually extends to his parents -- clearly, they've set the tone for avoidance. They avoid the reality of his brother's issues, they avoid each other -- so nobody in Peregrine's family is stripping away pretense and avoidance and facing the truth. Family is flawed, situations are painful, and sometimes, there's no way to turn the other way and ignore it.

The theme of "confront-and-deal" is frequently accessed in the work of Ned Vizzini, but never quite in such a wildly unpredictable, slightly surreal way. I mean, there's a tail. Had I mentioned that? A tail.

Cover Chatter: I've mentioned before how much I love the gaming pieces. The character is as stated - short, dark haired, and skinny. Though Perry doesn't look as geeky to me as he thinks himself to be, he's clearly not your stereotypical ripped, blonde, and partially-exposed (chest, arms, whatever) male YA cover model. Sooo, a question, book designers: if we have a spotty and scrawny looking (only very slightly, but still) title character gracing this cover, why can't we have slightly less than perfect looking girls? Just a thought on objectification there...


DEAR FTC: ARC received from publisher, courtesy of the author. No money exchanged hands; my opinions are my own.

AS OF SEPTEMBER 25, 2012, find THE OTHER NORMALS by Ned Vizzini at online and independent bookstores near you!