In the sixty-five years since India was no longer a single entity but because itself and Pakistan, then later Pakistan and Bangladesh, there has been a lot of hostility, a lot of suspicion, and a lot of bloodshed. The causes and consequences are numerous, depending on which historian you ask. Colonialism, British interference, religiosity and greed could be blamed, in a big-picture analysis.

For the little picture -- and the individuals involved -- none of that is the point. The point is, in the Partition, a people lost their families, they lost their friends, and essentially, they lost their country. It's a loss that will perhaps never be assuaged.

Reader Gut Reaction: This was an atmospheric, gradual, and difficult read -- at times, a little too gradual and atmospheric. A potential drawback to knowledgeable readers is that there is only one way this book can end -- but this is also a valuable piece of historical fiction for older teens seeking to get a grip on the circumstances of postwar colonialism.

The individual characters in the village of Gujarat create a great deal of rich texture and interest in this novel, as each of Bilal's friends - a representative sampling of a Hindu, Sikh and a Muslim boy -- are well-drawn. This quirky cast of characters presents an entry point into the novel, while getting further into the history of India...

Concerning Character: Bilal is quick-minded, savvy, and the kind of kid who, given enough time, can ferret out information from adults, figure out ways around them, and get what he wants and needs. He moves easily through interactions with people twice his age, and tries hard to uphold his father's reverence for books, knowledge, and tradition. Bilal's grasp of his community is tested as politics overwhelm the village. Everyone is constantly fighting - first with words, then with real violence. The air of leisurely contemplation, informed debate and studious discussion is at an end, and Bilal's father is aghast and dismayed. His greatest fear is that his beautiful country will be permanently divided by the ideologies which currently separate them. When the village physician, Doctorji, informs Bilal that his father's battle with cancer will soon be lost, a loving son wants nothing more than to create a world for his father that is what he remembers - the way things used to be, when a unified country was a given. What can it hurt, after all, to let his father die in peace? It's a beautiful lie... one that becomes vastly more complicated and impossible to maintain.

Recommended for Fans Of...: richly imagined and deeply felt historical novels such as The Good Braider, by Terry Farrish, Revolution is Not a Dinner Party, by Ying Chang Compestine; The Green Glass Sea and its sequel White Sands, Red Menace, by Ellen Klages and The Wicked and the Just, by J. Anderson Coates. That's kind of a mixed bag of recommendations, but this is, in many ways, a book which covers a lot of ground in terms of history, tolerance, understanding, and justice. 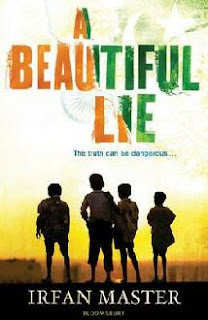 Themes & Things: In some ways, the theme of an historical novel is simply found - and easily understood in that 20/20 hindsight we all have: should people in Pakistan or India have divided? Should religion have kept families apart? Should any intellectual rift conclude in bloodshed? Perhaps not. And yet, much of history is created of subtle details over which only the unwise make snap judgements. There is much more than the obvious conclusions found in this novel. There's an exploration of the boundaries of truth -- how damaging is it to tell a lie for someone's own good? -- prejudice, as Bilal and his friends of varying faiths try to each live out their truths, and really, love -- love of country, yes, but love of family. This novel has crossover potential, as these big concepts will challenge adult and teen readers alike.

Authorial Asides: A BEAUTIFUL LIE was shortlisted for the Waterstone's Children's Book Prize and nominated for the 2011 Branford Boase Award. It was published awhile ago in the UK, obviously. This is the author's novel debut.


You can find A BEAUTIFUL LIE by Irfan Master at an independent bookstore near you!

Oh, wow--I really want to read this one. My dad was a little kid in Delhi during the Partition. He and most of his family ended up going to the Pakistan side, but we've still got relatives in the India side, too.

Isn't that trippy? And so many people don't even realize that Once Upon A Time... one country.

I was informed by reading this, but also the kid is cute. He reminds me - and this sounds bad, but I liked him - of Ali in the Disney version of Aladdin.

Bad as it may sound, I love that movie...