The folks at Strange Chemistry/Angry Robot have good things going for them -- among other things, a really cool name that sounds like a cover band for someone like Oingo Boingo. Obviously, the best thing about Strange Chemistry is there, you know, books... and I just finished a gulp-it-in-one-sitting volume complete with dorky guys, ultra-fat skin-lickers (shudder) and a whole universe based on quantum physics that you can't understand. (Don't worry. I don't understand it, either.)

Reader Gut Reaction: There's a knack to real adventure novels - the sort like Peter Pan or Robinson Crusoe, where you've got a kid with knowledge and know-how who ends up In Dire Peril, and then manages to somehow both save himself and/or society, by the skin of his teeth. The bits of Derring-Do are usually things the reader wouldn't do him or herself, and so there's that edge-of-the-seat thing going on. SHIFT has elements of that. Curran has managed, in her debut novel, to recapture an adventure novel with elements of an old-school, rip-roaring adventure.

Scott, who hates his life, his family, and really, himself, is hanging out with "cool" people one night. In the heat of an embarrassing moment, he is goaded into doing something stupid. Peer pressure pushes him to endanger himself -- he climbs a massive pylon, and then -- falls. Or, he thinks he falls. He wishes he hadn't bothered to climb it, and -- poof. He's lying on his back next to the fence he just fell over. Suddenly, the past has shifted. Or, is that the future?? When an attractive girl named Aubrey arrests him and spouts some nonsense about "shifting," Scott's bewildered - but intrigued. Shifts open up a whole new world... and Scott's just as happy to leave his behind. However, there are things good and bad in any world, and nothing is quite as it seems...

Concerning Character: I like the main character, Scott, because, to put it simply, he isn't stupid. He's an Average Kid who, when in trouble, finds a kind adult and wants to turn things over to him. Every time the other teens around him pull a Nancy Drew and think, "No! We'll investigate it ourselves!" he cringes.

This is DEEPLY realistic. 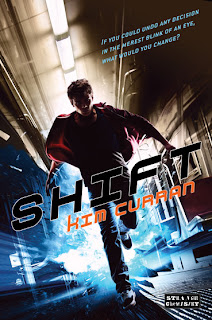 Recommended for Fans Of...: ...adventure. Think the KIKI STRIKE books, by Kirsten Miller, THE HOMEWARD BOUNDERS, by Diana Wynne Jones, timeslip novels like Edward Ormondroyd's TIME AT THE TOP, the ARTEMIS FOWL books, and those sorts of stories wherein a character takes things into their own hands and takes their own strange abilities in stride. This really does have a lot in common with some of the old-school adventure novels from the 80's.

Themes & Things: At the risk of revealing a little too much of the story, one of the themes is teamwork and trust. Scott's issues begin in a moment of peer pressure, but learning to use and accept his Shift-y powers is a team effort. Most of our teen years are a team effort, as that village of parents/relatives and teachers and friends are there to raise us -- but how many of the "village people" are necessary? And how much decision-making do we really have to do ourselves? This is the first novel I've read that has kind of had a "think about it" subplot going about peer pressure and groups. It's nothing overt, but it's nice.

Cover Chatter: I think we can say that this cover has some male-interest things going for it -- movement, a male cover model, indistinct lighting, and unique colors, none of them pink (Author Kim Curran's name is in orange).

Isn't it amazing how simple it is for a YA novel to be not seen as girly? What's nice is that this action-figure sort of cover is also girl-friendly, too, if a girl is a fan of science fiction and fantasy.


This review unsolicited; no money exchanged hands, and the book came gratis in ebook form from the publisher.

You can find SHIFT by Kim Curran online in the UK or US, and at an independent bookstore near you!

Posted by tanita✿davis at 10:29 AM
Labels: Fantasy/Sci-Fi, Reviews