Meanwhile, over at Tor.com - oh, my goodness, the cover of PJ Hoover's new book. She talks inspiration and mentions LOGAN'S RUN. That movie is a Bad SF Nite staple around these parts, so double-yay and GO PJ! Another cheer for those mad women from Texas, and all of those AUSTIN YA AUTHORS - may your tribe increase, guys.

Sheila says we can shout our Cybils newsfrom a mountain now, if we want to... so...:

I'm liking my mountaintop, here. Although, maybe it should be more brownish-gold, as I'm in Cali and not The Land of Eternal Rain and Fifty Shades of Green? (No, not THAT fifty shades of Green. Sheesh.) Anyway, the reading begins NOW - sure, the nomination period is in October, but there are tons of popular SFF novels that are obviously going to be selected - so, readers, start your engines!

Well. Seems like it's not the end of books after all. Who knew.

And may I just say that I don't consider Maria from Sesame Street to be in BACA (Bloggers Against Celebrity Authors) territory? She just wrote a YA novel about a Puerto Rican girl awakened to political activism and to her cultural heritage while living in Spanish Harlem (El Barrio) in 1969. Um, wow. Oh, and her name isn't actually Maria... it's Sonia Manzano.

Ooh, more childhood icons - Sword & Laser podcast - those awesome people who review books @ Geek & Sundry - have LeVAR BURTON ON THEIR SHOW!!! I suppose I should stop humming the Next Gen theme song...

Bookstore and Library events throughout the US to be held October 6, 2012 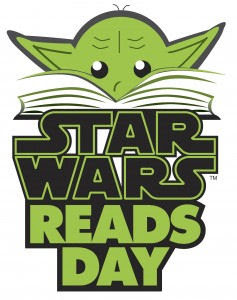 Officially participating bookstores and libraries will receive a Star Wars event kit (free of charge). The kit includes: an exclusive Star Wars Reads promotional item (25-50 per event); raffle prizes; promotional giveaways; a packet of event ideas, reproducible activity sheets and trivia; and more. The events will have the PR and marketing support of the eight participating publishers and Lucasfilm.

If your store or library would like to participate in Star Wars Reads Day on October 6, please sign up here: http://tinyurl.com/swrd2012

Hat tip to SF Signal, and doesn't this press release have the cutest icon yet???

Posted by tanita✿davis at 4:13 PM

Hey! Thank you for the shout out! Hope you have been doing fab! :)

@ Colleen Oh! Good idea!
@PJ Hey, thanks for dropping by. Glad to see you on Tor! Very excited for you.