Recently, Tanita and I participated in the Diana Wynne Jones blog tour organized by the amazing Sharyn November. Looking back at our respective memories of the inimitable DWJ inspired us both to think about going back to re-read old favorites and discover new ones, and what better place to start, I thought, than the book which captivated me in the first place? 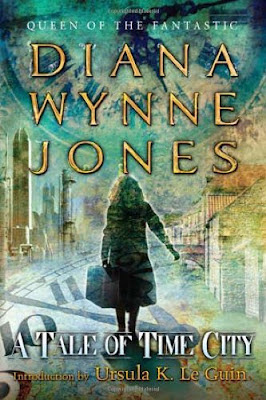 Reader Gut Reaction: My expectations for this one started pretty high. After all, this was the first DWJ book I'd ever read, at age 10 (approximately), and as such, it occupies a rather lofty pedestal in my mind and my memory. My nostalgia makes me afraid to re-read old favorites because I worry that they won't stand up to the test of time, but this action-packed tale of time travel DOES pass the test, and with flying colors. A Tale of Time City is not, however, the kind of time travel story that gets hung up on logistics or excruciating scientific detail. It's primarily a story of characters on a fantastical adventure, with just the right amount of detail to bring everything to life and sufficiently explain logistics without getting bogged down.

Time City is a place which exists outside of the conventional historical timeline, a place where the inhabitants—while human, just like you and me—have had the fortune to be born in the place which keeps the timeline running with a minimum of mishap. Not unlike Connie Willis's time researchers, the denizens of Time City may be placed in any time period as Observers, making sure nothing goes wrong or simply delving into research like anthropologists doing fieldwork. That's where our main characters come in...

Concerning Character: The main character—the one whose viewpoint we inhabit—is Vivian Smith, a girl who has been evacuated from London during the bombing of World War II and sent to live in the country with Cousin Marty. However, instead of meeting Cousin Marty at the train station, she ends up whisked away to a bizarre and wondrous place where delectable foods like butter-pies (and, trust me, after reading this you will WANT one) come right out of futuristic machines: Time City.

The ones who whisked her away—a boy around her age named Jonathan and a younger boy named Sam—are convinced she is their cousin, also named Vivian Smith, the daughter of Observers sent to live in WWII-era England. Vivian knows they've got the wrong girl, but she goes along with it for now...and Time City is an awfully wonderful place to have accidentally ended up, until, of course, all three of the kids discover that something is going terribly wrong with the whole of Time...

As always with DWJ, the main characters and the side characters are fully-rounded, sympathetic, multidimensional, and lively. People—even powerful, grown-up people—have faults and quirks, and never, never, never does the author underestimate the intelligence of her readers.

Recommended for Fans Of...: Connie Willis's time travel books, as well as Madeleine L'Engle's many classic novels that involve inhabitants of other times and aren't afraid to include elements of fantasy or mythology, either--A Wrinkle in Time, A Swiftly Tilting Planet, Many Waters, just to name a few. Charlotte Sometimes by Penelope Farmer (reviewed here), is another time-slip novel featuring similarly-aged characters.

Themes & Things: This is a novel that starts with a deception, and, appropriately, ends with a revelation—there are deceptions within deceptions, and people have their varying, individual reasons to perpetrate them. When is deception necessary, and when does it lead to lies spinning out of control? When is it right to own up to one's deceptions? When should deception lead to punishment or comeuppance, and when is it a bit more complicated than just black and white, right and wrong? DWJ's novels, to me, are all about the shades of gray, about the endless complexities of people's motivations and desires and emotions getting all muddled up and making them act, perhaps, in ways that they shouldn't.

Cover Chatter: This book is a recent re-release from Firebird, featuring a not-to-be-missed introduction from Ursula K. LeGuin and a brand-new, very nice cover—I love that sense of moving through time created by the silhouette of the girl with her suitcase, images of buildings and clocks swirling about. Very well done, and more appealing than the cover I remember from the late '80s, which I seem to recall was rather cartoony.

You can find A Tale of Time City by Diana Wynne Jones at an independent bookstore near you!
Posted by Sarah Stevenson at 8:00 AM
Labels: Adventure, AF, Fantasy/Sci-Fi, Magical Realism, Reviews

I love Diana Wynne Jones. While I read a lot of her books growing up, I read this book for the first time as an adult - my school library did not have it. Even reading it only as an adult, I was still wrapped up in the world and the characters. There is something about Diana Wynne Jones' writing that seems to transcend age. There's something for everyone to love in her books.

Megan: Same here--I feel like her books transcend age. And I was thrilled about the Howl's Moving Castle movie, especially thinking that it might alert a whole new generation to her books!

This was one of my faves, and also one of the first of hers I read as an adult - it changed things.

This was the first book I read by her!! Loved it!