Short of my time with Grapes of Wrath in high school, and Karen Hesse's Out of the Dust, I have to admit that my grasp of Dust Bowl literature is not all that firm. I read way too much into it, and find myself wheezing and coughing at the idea of dust, dust, dust. And don't get me started on locusts or whatever. The Midwest in the 30's: it's very much my nightmare.

Reader Gut Reaction: I like the idea of a fairy series set in the Old West. Much of American fiction set in the thirties is concerned with the concrete - job losses, racial instability, post World War I angst and hills like white elephants or something. Fiction for teens and young adults set in that time tends to lean toward Rockefeller-esque excess, high-class hijinks and the like - a lot of raccoon coats, bobbed hair, and bored people at dances. And yet, there is certainly more to the era, and more to the history of Americans at the time. People were superstitious and believed in all manner of things, so fairies -- and the battles of the fae for the world - are perfectly reasonable. This novel is a strong beginning for what's going to be a really interesting trilogy.
Concerning Character: Callie is a determined person. Hedged about by her mother's rules of conduct and courtesy, even as they're among the last two people in Slow Run, Callie keeps her chin up. It gets a little tougher to pretend that all is well when the doctor leaves... he's the only one keeping Callie's body and soul together. The dust pneumonia, which causes her to have to sleep in a muslin mask, is going to kill her. And YET: her mother weeps for her, but will not budge from Slow Run. Not when her father might be back for her, any day. Not when she promised she'd stay ... Callie is, deep down, justifiably angry -- and angrier still when her mother wants her to "call" him. She's had the ability to call him back, all this time, just by doing one simple thing? But, the simple thing turns out to be much, much more complex than Callie ever dreamed, and when she loses her mother, she knows she has to get out of Slow Run -- and find out what's really going on with her life. The adventure that follows is surprising, fresh, and engaging. 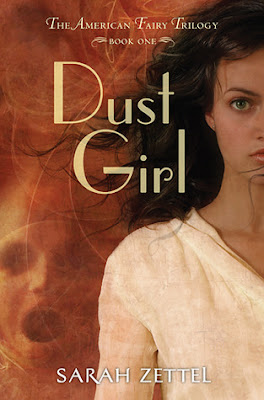 Recommended for Fans Of...: Novels in which girls find their strength and do things - two which come to mind are Holly Black's Tithe, Justine Larbalestier's Magic or Madness series and Melissa Marr's Wicked Lovely series - but neither of these are quite a match. This is a whole new idea.
Themes & Things: Themes are of self-reliance, decision-making, and there's a strong, strong theme of identity -- hiding who we are, vs. being out loud and proud with every part of it. Slow Run, Kansas in the early thirties isn't ready for all of Callie - but more important is that she learns to be ready for herself.
Cover Chatter: On one hand, thank you, cover people, for adding to my nightmares about dust. Now it has faces in it, ghostly ones. Great. Thank you so much. On the other hand, the cover model is meant to represent a biracial Callie - a fair enough job perhaps for face and eyes - we can never judge how a biracial person's mingled ethnicities show in their skin, but I cry foul, because the author described Callie's hair as black, coarse, and braided down to keep it straighter... yet, we get ripply, flowing, loose, and brown. Apparently having a YA female book cover sans the quarter face/torso and the flowing hair would set off some sort of time-space disruption... c'mon book people, it's a great story, please add some awesome with the cover!
You can find DUST GIRL by Sarah Zettel at an independent bookstore near you!
Posted by tanita✿davis at 6:04 AM
Labels: Adventure, Class and Identity in YA literature, Ethnicity and YA Literature, Historical Fiction, Magical Realism, Reviews