Thursday Review: TRY NOT TO BREATHE by Jennifer R. Hubbard

In the interests of full disclosure, Try Not to Breathe author Jenn Hubbard is a writing pal and blog bud—we reviewed her first novel, The Secret Year, right here. 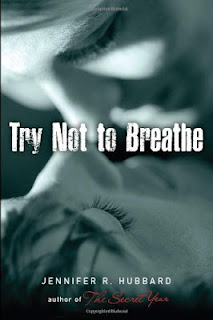 Reader Gut Reaction: This is another powerful book from Jenn Hubbard that brings a guy's perspective to what might ordinarily be termed an "issue novel" or problem novel—and, in my opinion, there still aren't quite enough novels that deal with serious issues of mental health from a guy's viewpoint, that encourage guys to look for help with their problems rather than stigmatizing mental health problems, letting them fester inside, and "manning up," as our culture seems to encourage young men to do more often than not. So I was glad to see this one. (Even if it did mean I had the R.E.M. song in my head for about a week straight.)

Concerning Character: In Try Not to Breathe, 16-year-old Ryan is living in the wake of a suicide attempt—his own. But, rather than focusing on the attempt itself and the events leading up to it, this is a story of the aftermath, of recovery from feelings of guilt and grief and unhappiness and confusion and the many ways they wear you down. And Ryan is a realistically complex character who has to stumble a few times on his way to the other side. His feelings of despair and desolation ring just as true as his flawed but sincere attempts to reassure his family and help Nicki in her desperation.

And, yes, this is also in many ways Nicki's story—the girl who manages to break down the solitary Ryan's defenses; although we only see her through Ryan's eyes, she is a fully developed character with a stubborn, contentious spirit that contrasts with Ryan's initial numbness. And she won't leave Ryan alone, no matter how much he tries not to encourage her. Her father's dead, and she thinks he understands something about death. She wants to understand, even if Ryan doesn't want to think about it, doesn't want to go through it all again, even if only in his memories. But he also finds protective feelings stirring, and so when Nicki starts on a possibly fruitless journey to figure out her father's death, he finally begins to engage again with the world around him, despite himself.

Recommended for Fans Of...: Stories about healing from mental or physical trauma, told from a guy's viewpoint, like Thaw by Monica Roe (reviewed here), First Day on Earth by Cecil Castellucci (reviewed here), and The Piper's Son by Melina Marchetta (reviewed here). I think this one would also appeal to Chris Crutcher fans, for its honest, authentic voice.

Themes & Things: As previously mentioned, this is a story about recovery from traumatic feelings and experiences, but it's also a novel of hope and healing, one that reminds us that sometimes the only way out of your troubles is to plow through. It's about the survivors of the world—even those whose survival was inadvertent—and the guilt of those left behind. Perhaps most powerfully, Ryan and Nicki's stories illustrate that life is a complex and confusing place where love and death, hope and grief, can be impossible to disentangle.

Authorial Asides: Jenn keeps an excellent and thoughtful blog about writing and other related topics over at writerjenn. You can also follow her on Twitter @JennRHubbard.

You can find Try Not to Breathe by Jennifer Hubbard at an independent bookstore near you!
Posted by Sarah Stevenson at 8:00 AM
Labels: AF, Guy Appeal, Problem Novels, Realistic Fiction, Reviews

Really intrigued to read this one. It's true - fewer boy books about depression or mental illness, and those that come out tend to stand out, so looking forward to this.

Thank you so much. It was a pleasant surprise to see your thoughtful review here!

Could you maybe do a piece on this? It is an initiative to start a site
that encourages young writers to share their works. It is called NewInk
and it is for young adult fiction: