TURNING PAGES: The Girl in the Clockwork Collar, by Kady Cross

Last year I dabbled in steampunk and reviewed The Girl in the Steel Corset. Despite me not intending to go further with the series, I was once again suckered by the dress on the cover! As always, these books are a quick read, and perfect for chucking in a bag to take along on errands. The action is fairly constant, and the plot, especially if you've read the previous episodes, is light enough to keep readers who aren't looking for anything heavy engaged.

Reader Gut Reaction:Finley, Griffin, Emily and Sam - I love their names - are once again together, but this time they're leaving London, and heading for the States, to see what's become of their friend Jasper, who, at the close of the previous novel, was headed for trouble at a fast clip because of his previously light-fingered ways. The settings are again rich and detailed - there's a lot of old New York to love here, and the Brits are rubbernecking to the benefit of the reader, who gets to take in the lovely Waldorf-Astoria hotel, and all the fashions of the day. The author did good research work here!

The titular character - the girl in the clockwork collar - is Mei, a young Asian girl whom Jasper has loved since he met in San Fransisco. Unfortunately, though the narrator gives us an omniscient view into the main characters' heads, I was never able to get into Mei's - and couldn't care less about her. Further, Griffin's preoccupation with Finley's goodness is a bit trying - however, with the focus kept on the action, there's plenty the four brilliant friends get up to which will hold a readers' interest. 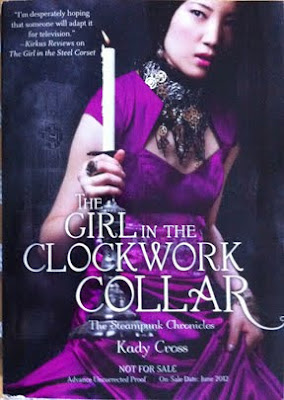 Concerning Character: The main character remains Finley, whose low station as compared to the shining Griffin still troubles her, even as she is crushing on him. She's part of the team, and does her job, but she struggles with thinking that Griffin doesn't think enough of her. Basically, she's doing stupid, stupid stuff... and why? Is it her scary, "terrible nature" coming through, or is she acting out merely to get a boy's attention? As Finley gets a grip, she turns her efforts toward Jasper's troubles, suspecting that all isn't as it appears. As events unfold, Finley is given a chance to see how far a person will go for what they want. And what, exactly, is it that she wants? Finley decides it's worth trying for, which gives readers a light, quick, happy ending.

Cover Chatter: An Asian girl featured prominently on the cover of a YA novel, wearing her steampunkery: Good. An Asian girl as the titular character of a novel: Great. An Asian girl who ...is kind of a sidekick, and the most conflicting character in the novel, one who readers will be scratching their heads over ...er, why?

***LIGHTLY SPOILERY DISCUSSION: PLEASE LOOK AWAY NOW IF THIS WILL TROUBLE YOU
As I say this, I'm well aware that some of you may disagree, or feel I'm seeking an Issue where there is none - you have the right to your opinion, of course! While I am not seeking an "issue," I do find some problems inherent in the character of Mei.

As in the previous novel, there is a huge betrayal. I saw the betrayal coming from afar, and for me, because Mei was involved, it was problematic, and tied to a tradition in literature and film that involves the deceitful, inscrutable Asian. As the novel deals with class and station, Mei's class/station is touched on only lightly... and Asians, at the turn of the century, were as exoticized and objectified as they ever were. We come to understand that Mei's movements are constricted, but Asian Americans as a whole - within the States at that time - are never mentioned.

With the cover, I suspect that Harlequin is trying to score points, but I don't think they've earned them. I wish that the involvement of characters of color in the novel could have been more organic - surely there was more than one Asian and a bunch of Irish folks making of the racial and ethnic diversity? - but I might be asking an awful lot from a lightly-plotted and superficial action/romance/beach novel. ***END SPOILERY DISCUSSION

It's a pretty cover. That is all.

I received this novel from NetGalley as an ARC; my opinions are my own.

As of June 1, you can find THE GIRL IN THE CLOCKWORK COLLAR by Kady Cross at an independent bookstore near you!

Posted by tanita✿davis at 4:00 AM
Labels: Adventure, Reviews, Romance, Steampunk

I was pretty concerned with the way Mei was presented as well. Especially considering how often Cross appropriates Asian culture into her characters' style and interests. If it was essential for the character of Mei to betray Jasper the way she did, at least Cross could have given us a little WHY...or perhaps another Asian character portrayed in a positive light.

Thanks for your comment, Michelle. There's so much drama surrounding covers and ethnicity in YA fiction sometimes and I didn't want to create excess drama - but it felt important to say something, because what was presented in this novel was an Asian girl largely without context, and she felt added in just for her Asian-ness, which makes her more trope than character... Which is unfortunate, when there was much more potential for an exploration of culture, and class and identity, and the REASONS behind who she was in the story.

It's unfortunate to hear that this is a case where the Asian character doesn't feel like a fully-fleshed-out one. I was excited when I saw the cover--and it IS pretty.