Monday Review: THE KNIFE AND THE BUTTERFLY by Ashley Hope Pérez

We really enjoyed Ashley Hope Pérez's debut novel What Can't Wait (reviewed here), so we're proud and excited to be a part of the blog tour for her latest novel, The Knife and the Butterfly. Tune in this Friday, February 17th, for Ashley's guest post about edgy fiction—what does it mean for fiction to have an edge? Join the discussion in just a few short days! In the meantime, we've got a review of her newest book, which plunges us straight into the intersecting stories of locked-up gang member Azael Arevalo and troubled teen-on-trial Lexi Allen.

Reader Gut Reaction: When we first meet Azael, he's just woken up in a cell—not for the first time, but something's different about this lockup. For one thing, he's got zero contact with the outside world, and for another, he can't remember anything that happened to him before he got locked up. He knows there was a fight with another gang, but after that...

The fact that Azael can't remember what got him locked up immediately creates a feeling of suspense and the need to keep reading to find out what really happened; and the more we find out, the stranger—and sadder—the story gets. Some have said that this is an "edgy" book, and it is, in the sense that it's a story about life in the world of gangs and taggers, fights and feuds, and, for Azael, the constant looming threats of arrest, foster care, and deportation. But it's also a sad story, and the author makes us feel for Azael and his tough situation, the hopeless feeling of inevitability that his life has, whether or not it's true. And the situation suffered by Lexi is no less difficult, as Azael begins to see--even though he's not sure what his jailers want him to learn from observing her. Sure, she's locked up, too, but what does that have to do with him? Solving the mystery of Lexi and the mystery of his own situation go hand in hand, of course, and the gradual revelation of clues and details kept me turning the pages. 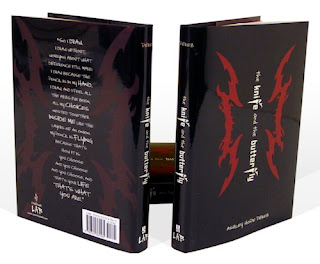 Concerning Character: Both characters offer an equally wrenching story—and I'm using wrenching here rather than edgy because, for me, it covers the subjective emotions of the characters, where "edgy" seems like a more detached term that refers more to their environments, their situations, the quality of their lives. Because we DO get such an intimate glimpse into both Azael's and Lexi's emotions—Azael because he's got nothing else to do BUT think while he's locked in his cell, and Lexi through her journal entries—it becomes clear very quickly that there is so much depth in both teens, so much pain and sadness in their lives. They are far more than just kids who have been failed by the system or who have fallen into tough circumstances or have made bad decisions. They are kids who are lost and hurting.

Recommended for Fans Of...: Stories about young people trying their best to make do under desperate circumstances, like Coe Booth's Tyrell (reviewed here) or Lockdown and other books by Walter Dean Myers.

Themes & Things: Despite the difficult subject matter and the seemingly hopeless situations of both Azael and Lexi, this book conveys a strong message of hope and redemption. Even if we can't change what's already happened, we all have the power within ourselves to change, at the very least, how we think and act in the future, and how we think and feel about ourselves in the present. As Azael does what he can to take control of his situation, as Lexi does her best to work through what's happened, both find an inner core of strength, and this helps them grasp at a sense of meaning in what often feels like a chaotic and rocky existence. In the end, while the ending is not exactly happy, we are left with a sense of relief that our paths in life aren't necessarily fixed and unswerving, that we can shift things in a direction for the good and that it's never too late to do so.

Authorial Asides: We're honored that Ashley was able to write and send us her guest post when she could easily have been doing other awesome things from her current location in Paris, the lucky duck (see that picture there? Aren't you envious?). For those who want to keep up with her writings and happenings, she keeps her own blog at AshleyPerez.com. You can also follow her on twitter @ashleyhopeperez or find her on Facebook.

You can find The Knife and the Butterfly by Ashley Hope Pérez at an independent bookstore near you!
Posted by Sarah Stevenson at 8:00 AM
Labels: AF, Magical Realism, Multicultural Fiction, Problem Novels, Realistic Fiction, Reviews

I really enjoyed The Knife and The Butterfly but it was a tricky one to review to avoid giving too much away.

I haven't started the galley yet but from the blurb alone I already know Happy Families is going to be tricky as well.

Agreed, Doret! I kept having to stop and think about the best way to phrase things so I wouldn't accidentally give away spoilers. Tricky for sure.

I don't know how publishers--who have to write that tricky bookflap copy--and reviewers do it. Beat the spoiler, I mean. But I am grateful. :)