Writer and Blogger Ashley Hope Pérez has been throwing her considerable intellect around a great deal these days. "Stuck" in Paris (Oh, hahaha) for a year as she works toward her PhD in Comparative Literature (with a wee man, age two, and a Big Man who is also working on his PhD. How. Do. They. Do. It?!), the writer struck on a brilliant way to promote the book which released while she was abroad, and still effortlessly keep up with everything else. (Cue author's, "Oh, hahaha.") She set out on a low-key blog tour with twenty-four stops (it's not really an oxymoron. No, seriously). Spread out from the end of January through the month of her book release, February, the posts are helping the author retain visibility, and allow readers familiarity with her name. They're also helping Pérez to convey a few big-ticket ideas along the way.

Being a funny person, some of the author's ideas are a bit on the funny side, some in the form of a teensy tiny rant. For instance, Pérez does not love the glossary thing, and we are with her on that. Despite the fact that her otherwise positive review at Kirkus said The Knife and the Butterfly could have used a glossary, Pérez disagrees. At Forever Young Adult she says, "...you really don’t need a glossary to read The Knife and the Butterfly. All you need is a big appetite for a story that will take you into dark places and show you a good dose of light, too." 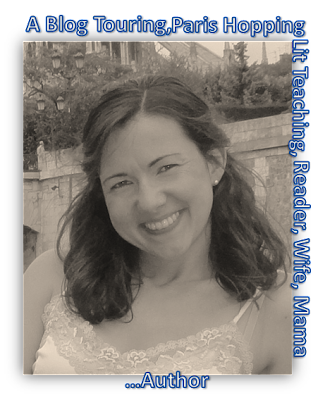 We have to agree. Sometimes American publishing - and this is possibly because many are always half thinking of YA novels in some scholastic context - really is too eager to dumb things down. I remember the scornful lift of many a teen lip as they realized that the American version of Harry Potter had been wiped clean of the many British-isms which editors felt would be distracting. "Really?" Young readers shrieked. "Do they think we're stupid?!" Um, no. But, um, yes. Sorry. It seems that they do. They also think you have zero attention span, but that's a rant for another day.

One thing you will not find in The Knife and the Butterfly - an author who thinks readers are stupid. Read on.

So, yeah. It's a novel about an Hispanic boy from a gang in jail. Shoppers, turn on your blue Kmart stereotype light, and let it spin and flash!

No, this isn't a case where, say, Pérez is Hispanic, so she can write these things. (She is not, but knows Hispanic culture very well, and has married into a Latino family.) That's like the dumb inference which means I can drop the n-word (or, hey, my Dad's half or maybe a quarter Greek; surely there's some Greek stereotype I'm now eligible to rock?), or that because of a slim piece of her ethnic background, A.F. can call people towel-heads. (If you've read The Latte Rebellion, you know you just Caught A Book Reference. Woot!) No. This is the author acknowledging a statistic, and busting the stereotype that merely taking statistics into account can engender, by bringing out the human side. During her visit to Actin' Up, Pérez said, "...I discovered that, even in the world of gangs and petty crimes, everyday realities cast a wider shadow than the stereotypes that pretend to contain them. Azael’s life is full of contrasts, love and loss, loyalty and recklessness."

WORD. People are breathing, flesh-and-blood entities creatures who cherish things, mourn things, hope for things, have vulnerabilities, and are real. A writer who messes around with stereotypes without thinking them through is asking for trouble. We like that Pérez not only thought of the seriousness of writing about gang members, she is honest and up-front enough about it to just be real, and get people's objections and uncertainties out of the way.

Another thing you find in The Knife and the Butterfly - an author who takes her subject seriously. Read on. 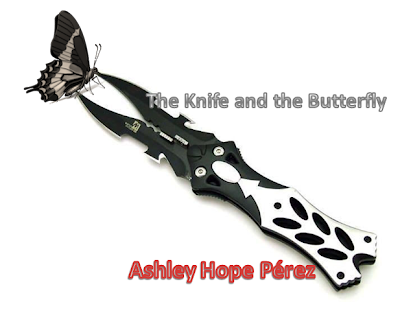 We are always about the art around here - whether that's because I like to mess around with images whilst thinking (my niece is the graphics design major; does this stop me from pretending that I am? Does she wish it would? Yes to both), or because A.F. is an actual bonafide Artist Type, but we love to hear how a book cover comes to be. Blogger Sarah Laurence actually asked, and Pérez graciously walked her through the previous drafts of the deliciously dark cover. And Oh, My Word, did she dodge a bullet with the Twilight feel/ Dark Angel kind of thing cover that came across at one point. On one hand, so evocative and kind of moody and gorgeous. On the other, so sending sixteen hundred varying and wrong messages about this particular book, and so, so DONE. Not every author gets a chance to be involved in the steps to produce a cover, so kudos to the editors who are confident enough to let the author in, and to the author who knows her mind enough to speak it. WIN on all sides.

While conveying Big Ideas, Pérez has managed to generate them for writers as well. My favorite post in terms of writerly things thus far is at Blogger Holly Schnindler's YA Outside the Lines. Pérez's ruminations on The Things That They Carried, by Tim O'Brien, and listing out the things Azael carries is both poignant and telling, and gives such an appalling look at the transience of this character on earth - he carries so little! And yet, he's such a presence, tagging all over the city, being mouthy and swaggering -- he seems so big. Contrasts. Complexities. Characters. (Writers - more on the subject on the author's blog.)

The best thing about a blog tour is that it allows an author to think deeply and really talk about their work, and allows readers to ask the niggling, secret, or silly questions they've got lurking within them about a work, about an author, or about their process. Ashley has been a guest blogger from whom the folks at Writers' Digest should take notes. There's more on deck for The Knife and the Butterfly blog tour, including a stop with us this Friday. Be sure and read A.F.'s review of The Knife and the Butterfly, which she struggled to keep spoiler-free, and we'll see you back here then.
Posted by tanita✿davis at 2:39 AM
Labels: Interviews, Random Notes and Errata, World o' Blogs

I usually think it's slightly tacky for the love-recipient to be the first to comment on something, but I seriously can't help myself! The blog tour has taught me tons and given me a chance to think through my own work even more. So I'm the grateful one. Tanita, thanks for giving me a big-picture sense of what I'm doing! :)