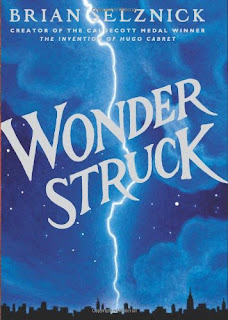 Wonderstruck, the second novel by the author of the incredible Invention of Hugo Cabret, was a finalist in this year's Cybils Awards for Elementary/Middle Grade Graphic Novels. As with Hugo, I had mixed feelings about whether this one belongs in graphic novels. It's truly a hybrid genre--large portions of the book took place entirely wordlessly, with only images telling the story. I'm just not sure there's anybody out there doing anything quite like it.

Reader Gut Reaction: This one is sure to grab readers who are visually oriented, as well as those with an irresistible urge to solve a mystery—We find out pretty quickly who Ben is, but who exactly is Rose? How is she connected to Ben? Admittedly, it's not the most sensational of mysteries, and it may be a little "quiet" for some readers, but the surprising parallels in Rose's and Ben's stories intertwine in ways that continue to foster that feeling of wonder in the reader. Their stories take place 50 years apart, but both find their way to New York, and both end up finding themselves in the process. It's an appealing story structure, and it kept me turning the pages, whether those pages were filled with words or with images. And, as with Hugo, I was again floored by how Selznick seamlessly blends fact and fiction in just the right way to intrigue the reader into finding out more about the factual elements—in this case, elements of natural history, of the history of New York and its museums, of deafness and deaf culture and its history.

Concerning Character: I loved the fact that Rose's story was told entirely in pictures—fitting for the story of someone with a non-hearing life—and Ben's in words, and then at the end both come together. The parallel stories told in two different modalities was a fantastic way of conveying the idea of a non-verbal narration from a deaf protagonist versus Ben's verbal experience of the world. It also helped create a sense of the two very different time periods constituting each story. 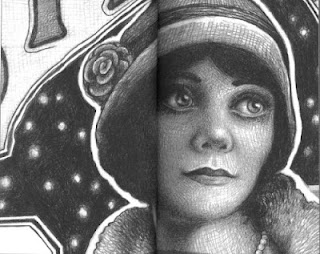 The full-page, bleed pencil drawings as always are absorbing and convey a lot of emotion and detail, fitting to Rose's story, which starts off with a sort of emotional desperation that is palpable as we understand her feelings of imprisonment in her own life and body. Ben, meanwhile, is dealing with his own storm of feelings, as he struggles to figure out who he is and what he should do in the wake of his mother's death.

Recommended for Fans Of...: Brian Selznick's first book, The Invention of Hugo Cabret, as well as fans of stories that bring to life the magic of museums, like the fabulous and classic work From the Mixed-Up Files of Mrs. Basil E. Frankweiler--which is mentioned in the author's notes and which I fully intend to re-read now.

Themes & Things: Above all, this is a story about discovery and, as the title notes, wonder. It's about going in search of something nameless in order to find yourself, and, in the process, being open to things like wonder and awe and coincidence and friendship, often in unexpected places. And, of course, it's about the joy of finding something you didn't even know you were looking for.

You can find Wonderstruck by Brian Selznick at an independent bookstore near you!
Posted by Sarah Stevenson at 8:00 AM
Labels: AF, Graphic Novels, Magical Realism, Middle Grade, Mystery, Realistic Fiction, Reviews

This is a fun book that people of ll ages will enjoy. I really liked the review on The Book Report radio show by Elaine Charles. Listen to it on http://bookreportradio.com