It's not often that I have a chance to review books which are truly multicultural, but this book is one. It's a quiet gem of stories interlinked by the common theme of freedom. Freedom is truly the subject at hand, as all proceeds from the novel are to go toward freeing others...

Reader Gut Reaction...According to Wikipedia, Azād is a word of Indo-Iranian origins, which means "free" - the author more specifically defines the word as "liberation." Despite its Arabic roots, the word azād is used in Indo-Iranian languages like Kurdish, Dari, Urdu, Persian and Punjabi -- as well as Armenian. From South Asia to Arabic lands, freedom is certainly a necessary component of the human condition, and Azad, A Flight of Desi Fantasy is a short story collection which unshackles the mind from convention in fiction and pitches it head first into a parallel universe where enigmatic sages and gods and monsters lurk. Though this book is sold as YA, its appeal is cross-generational.

A street vendor, a teen girl from the suburbs, a completely nonathletic ten-year-old boy, a nonconformist young Indian woman, a goodhearted - but unlucky - rickshaw driver, and a young Muslim man in NY are all subjects on their own stages - and then the forces of Other step in. Rich in imagery and enigma, Behera's debut YA collection of short fiction is ripe with magical realism, gods, and fate. You'll have no idea where you're going, but you'll be better off when you get there.

Concerning Character..."The Gondolier" - Ravi and Nwanko's escape from their hand-to-mouth existence in Venice includes a gondola, a sea god, and a tanker -- things no one would have believed.

Nachli Iyer danced her the world into existences - and almost right out again.

"Golden" - Sona Grewal dreams of baseball - but loathes baseball practice, until one day... 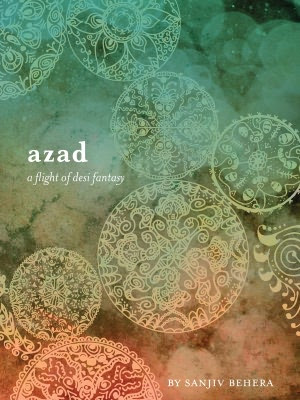 In Passage, Swati, her family's unmarried burden, is horrified when their family home burns down. It is brought home to her that ultimately, it is her fault, for being too stubborn, too difficult, and too different. Truly, only Buddah can help her...

"Vinayaka" - A satisfying tale of obstacles removed and kindnesses done, "Vinayaka" will be a favorite to those who love a happy ending. It, incidentally, is also the only story in the collection with a tiny cultural footnote - none of the rest of the stories need even the little bit of interpretation.

"The Djinn's Wings" - the final story in the collection. Zubin Khan's first job in New York isn't the joy it was supposed to be -- because at every opportunity, his boss chips away at his self image, insults him, and belittles. Revenge is easy -- but it's living with the consequences of your actions that's sometimes hard.

Recommended for Fans Of...: The Kissing, and other works by Merlinda Bobis, The Magicians, by Lev Grossman, Jhumpa Lahiri's Interpreter of Maladies, The Shadow Speaker, by Nnedi Okorafor-Mbachu, and the work of Chitra Banerjee Divakaruni.

Cover Chatter: Rickshaw Books and Sanjiv Behera have chosen a beautiful and simple mehndi pattern for the cover, which is a sacred painting and artistic motif used by Bengali and other South Asian peoples. All author proceeds from this novel will be donated to helping stop child trafficking in India. Enchanting storytelling and real-life freedom: win/win.

You can order AZAD: A Flight of Desi Fantasy from an online bookseller.
Posted by tanita✿davis at 8:38 AM
Labels: Magical Realism, Multicultural Fiction, Reviews

That is a GORGEOUS cover! It looks like it could be mehndi patterns, not that I'm an expert (though I did have a job doing that for about two months one summer). Anyway, glad you had a chance to review this one--it sounds intriguing!

A short story collection for YA. Yay and hmmmmm....