Ah, I love blog-wandering. Thank you, awesome people, for having linkage in your margins. I do find the most awesome things sometimes... 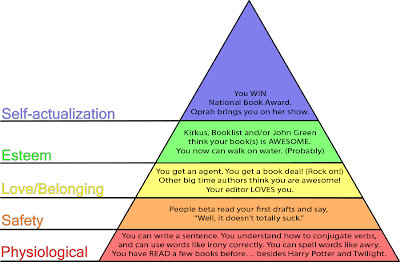 I discovered this retake on Maslow's Hierarchy of Needs, designed by writer/blogista Miranda Kenneally, at The YA-5. (The YA-5 are a team-blog of five writers, one of which is K.A. Holt of The Spectacle Blog, at which we also lurk and read about YA speculative fiction.)

Though a mere starting point in the challenge of unraveling the human psyche, the whole Maslow's thing is pretty entertaining. At least, I was entertained by it mightily in my sociology class in college. I used to identify people by where they were in the hierarchy, and was greatly amused to watch my students try to manipulate me by using the lower tier needs to disrupt the higher tier needs. (I made you these cookies! They're still hot -- don't they smell great? You liked my essay, right? I don't have to rewrite?)

We'd all like to think we're well on the ladder to self-sufficiency, creativity, acceptance, morality, and rational living, but... let's be honest, this kind of thing varies from minute to minute. As is everyone else, I'm on the ladder, but that's about all I can say.

I have to laugh at finding myself on Miranda's Hierarchy of Publishing. I'm not sure knowing how to properly use the word "irony" works as a filter - I know professional people who write and don't differentiate between "peak" and "peek" (homonym homicide), and who also believe that, due to popular usage, "irregardless" is an acceptable word. (TRUST ME: It. Is. Not. Let's not get me on my soapbox.) However, I think the lowest tier covers basic middle school English - verb conjugation and such -- and that makes sense.

I chuckled at the inclusion of John Green in the hierarchy. I stood in a room with him once, did I tell you that? He didn't know who I was from Eve. But, still. I'm on the rungs, people. I am ON MY WAY.

My main problem with this hierarchy - though it's really funny, clever, and gave me a moment of introspection as I tried to figure out my place within it - is that self-actualization is equated with winning a major literary award, and meeting Oprah. I don't know about that.

One of the things writers do is write. They write, and it doesn't matter who reads it, or who wants to read it, or who thinks it's good or bad - they fulfill their potential by writing. It's not something that has to do with external validation.

Publishing, conversely, will obviously have to have an outlet which will lead to being in print. But as we as bloggers have gone back and forth about what reviews mean to us and to the kids and young adults who read the books we discuss, I'm not convinced that awards and attention by the literati have any more meaning than someone handing you a book and saying, "Oh, my GOSH, I loved this one, and you should TOTALLY READ IT."

Actually, to me, that means more.

Not that I'm turning down meeting Oprah. Discreetly. Somewhere there are no cameras. But, you know what I mean...

Thoughts? Your own place in the hierarchy? The general awesomeness of John Green? Discuss.
Posted by tanita✿davis at 7:55 AM
Labels: c, Random Notes and Errata

I definitely agree with you that equating self-actualization with winning an award doesn't work. While the publishing hierarchy is a spoof and funny, the other levels also happen to parallel Maslow's levels. With Maslow's hierarchy, self-actualization seems to be inner directed and related to defining yourself in terms of personal qualities. With the publishing hierarchy it is outer directed and involves defining yourself in terms of someone else's opinion of you.

That can only lead to unhappiness.

Great point, Gail. Success (as defined by the establishment) and self-actualization aren't exactly the same thing and equating them only leads to Bad Stuff.

But it's still an amusing graphic. :)

Also, though...I'm not sure it's a pyramid so much as a seesaw, whether we're talking about the hierarchy of needs or publishing...though hopefully that's confined to yellow and above.

On John Green: I actually CONVERSED with him at a past SCBWI conference (2007?), thanks to Kelly F. However, I was just some random blogger and aspiring author at that point, and I'm positive he would not remember that. (Especially since I didn't say much...)

Google Alerts alerted me that my nonsense was being discussed, so here I am. :)

You're probably right regarding the highest rung. An award doesn't mean you've perfected your craft and in you're in a state of enlightenment. However, that's YOU.

In my opinion (which I just discovered 3 minutes ago), "self-actualization" must be defined by you and you alone.

In my work-work life (that dreaded day job), I am in the highest rung of the hierarchy. I'm thinking about how I can change the way my work does business. I'm thinking big picture, long-term things.

But my colleague, who is also in that top rung of the hierarchy, is thinking about how he'll be running the place one day.

We have different goals.

For some reason, I equate self-actualization with book awards. Yeah, I guess I'm a total snob. :P

Thanks for expanding on my silly post - gives me more to think about. :) And you make very good points.

"We have different goals."

Yeah.
And I think part of my understanding of the rungs of the hierarchy has to do with what a person hope to get out of writing -- whether one hope to be entertaining and churn out a lot of volume, or if one wishes to focus on craft and write a challenging literary story etc. --

The real issue is that I have served on committees and been a book "judge" for various little things, and find awards have more to do with popularity and buzz and the agenda of the committee more than actual quality of a book... a committee is just a bunch of people, after all, so I shy away from the idea that they give ME value, in this illustration.

I do think this was a fun little experiment and gave me a lot to think about, though, so thanks, Miranda!

Maybe we need two hierarchies: one that's just about the business (which would closely resemble mine), and one about craft and self-improvement.

Actually, you're not getting dorkier -- I almost think that there are two tracks of thought going on in terms of YA publishing -- the awards thing vs. the popular fiction thing. We ask people when we interview them, would you rather win a Newbery or the acclaim of hundreds of YA'ers? We've had some mixed answers, but it truly is a rare person who hits both hierarchies on that -- the self-improvement/craft oriented/ALA-awarded book vs. selling a lot because your book is popular with readers and has sheer entertainment value...