Xin Nian Kuai Le!
Gung Hay Fat Choi, bunny people. Peace and serenity and joy to you, this year of the Rabbit. Gong Xi Fa Cai - may prosperity be with you as well.
(And thus we have reached the end of my Asian language knowledge, unless you want me to sing to you in Korean. You don't, right?)

I was all jazzed to present a book to you today, but I'm not quite done with it!! (Oops.) Nonetheless, I'm proud to talk up what I've read of Sherri S Tepper's The Waters Rising. While this novel isn't marketed to the YA audience, it has major crossover potential to readers of epic fantasy who are used to very convoluted storylines, and lovers of fantasy and fairytale -- who nevertheless wouldn't mind a post-apocalyptic kink in the works. Think a touch of Cashore's Graceling + the Kathleen Duey Resurrection of Magic duo + a soupçon of Susan Pfeffer's post-apocalyptic works. Weird, huh? And yet, that's what I love about the writing of Sherri Tepper. She takes those kinds of risks on story arcs and does "weird" with aplomb, turning it into something thought-provoking that sticks with the reader for a long time after.

So, as in many post-apocalyptic books -- make that all of them -- the contemporary modern way of life has ended. The Big Kill is an historical fact, and people look back and shudder at the die-off of people and species and the mass murders that occurred during that time. No one saw the murderers, and people are still isolated and afraid. In Norland, where people gather and live in peace, there is still terror -- of the rising sea, of the strangeness of the land, and curses abound -- real curses, where people get hurt, or die. Abasio is a wanderer with knowledge which he shares as he travels, taking the place of newspapers. A jack-of-all-trades type masquerading as a yokel, he meets a small Tiangawanese girl along the road who tells him of a task that she must do. She is the soul-carrier of the Woman Upstairs -- a princess who is dying from a curse. Abasio is the one who must help Xulai do one last task for the princess-- and Xulai is sure Abasio has been sent to help her.

(It was especially lovely for me to meet Abasio again - he appeared in another Tepper novel I read -- and ended the book grieving for a dear friend who died. It feels good to have him around, able to have other people like him, and it redeems the conclusion of A Plague of Angels for me. Ah, books. The only place in the world where we can have do-overs and make people happy again.)

A simple meeting between a young man and a little girl becomes the first step in an epic struggle. Xulai does her task, which allows her mistress to die in peace -- but a soul carrier's job is only begun once she carries the soul of another. Inimical forces (don't you just love those?) interfere with her return to Tiangawan. An evil woman - the Duchess of Altamont - with cursing powers from lost machines of the Before Time has killed and will kill again, in order to wipe out the Tiangawan and their nation. Around every corner it seems there is someone else in this woman's pocket, and there is danger aplenty. Part coming of age epic, part scary alternative world plotline, this story has plenty of heart, with characters readers will truly enjoy. 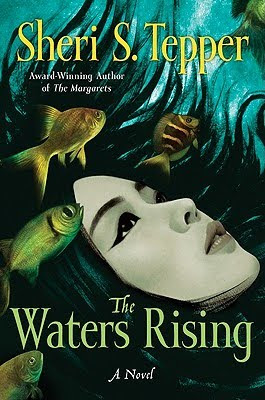 Reading back over the story description, it kind of sounds like the plot to a video game, but it really is a good book, and I'm more than halfway through it. Tepper's writing usually includes a sort of "abused Earth" theme in which The Environment Strikes Back. In this case, there's been deserts blasted into the ground by nuclear pollution, and now, the water is rising. And water stops for no one.

Because of that environmental bent, Tepper's work can be preachy -- just about everyone writing about pollution, population control and global warming can skew that direction without really trying, because a lot of people are unable to hear anything on those topics -- but she asks, as John Scalzi terms it "inconvenient questions" with her fiction, and allows the reader to really think about larger questions in terms of her work. The storyline is rich and well-crafted, and the reader dives in -- getting caught in the fantasy and science fiction-y elements, thinking deeply, and enjoying the ride.

You can find THE WATERS RISING and all the other fantabulous Tepper books, at an independent bookstore near you!
Posted by tanita✿davis at 2:44 AM
Labels: Fantasy/Sci-Fi, Magical Realism, Multicultural Fiction, Reviews

Thanks for stopping by, Kathleen!