More catching up from me today: two quick reviews of middle-grade titles that crossed my desk over the past few months. There's sort of a gem or jewel theme to both of these, hence the post title. Source: I received Darius Bell and the Glitter Pool from a book publicist, and I bought a copy of The Diamond of Darkhold at an SCBWI conference.

The Diamond of Darkhold, which I actually read months ago and forgot to review (Bad Aquafortis! Bad!), is the fourth book in Jeanne DuPrau's Ember series. I'm definitely a fan of this series, and the fact that the author is local to the San Francisco Bay Area and created a setting suggesting a dystopian California only makes it more enjoyable for me. In this volume, we rejoin our heroes Lina and Doon as they continue to their new and hardscrabble lives aboveground in the town of Sparks.

Life in Sparks seems dire, until Doon finds a clue to a device that Ember's builders may have left behind—a device that could make all of their lives better. Unfortunately, they may have to return to Ember to find it...and, as it turns out, they're not the only ones searching the remains of the underground city. This volume reprises the tense adventure feel of the first book, in which Lina and Doon escape Ember—and it reminds us once more that a creative spirit, an open mind and an open heart are as important to our survival as stubbornness and grit. Fans of the series will no doubt be happy about another adventure in this unique and compelling setting—I definitely was.

Buy The Diamond of Darkhold from an independent bookstore near you! 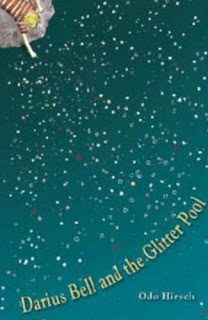 Darius Bell and the Glitter Pool by Odo Hirsch isn't exactly a fantasy novel, but it does have a whimsical feel to it. In fact, the setting is reasonably realistic and modern-day, but fictitious, with a sort of fairy-tale, "once-upon-a-time" feel. In this story, the Bell family was once wealthy and powerful, living on a grand estate, gentlefolk benefiting from the riches showered upon them by the townspeople. In return—according to an ancient agreement, the Bell Grant—the Bells would give a grandiose gift to the town every 25 years: a statue, or a belltower, or something equally impressive.

Now, though, the Bell family's running out of money. Everyone knows it, but nobody's talking about it. The grounds are in decline, and the time's almost up for Darius's dad to give his gift to the town—but how can they afford anything at all? Darius, though, has an ingenious idea, and he enlists the help of several friends, a curious archeologist, and even his annoying, know-it-all older brother to try to make it a reality. I hadn't ever read anything by Odo Hirsch before, but I enjoyed this one. What could have been simply a fairy-tale-like story of the youngest son embarking on a quest and redeeming his family ended up a very endearing, down-to-earth, funny story about finding a creative way out of a dilemma and growing closer to family and friends in the process. Darius is determined, smart and likeable, and the remaining cast of characters are quirky but also believable. This also strikes me as a fun one for parents to read together with younger kids.

Buy Darius Bell and the Glitter Pool from an independent bookstore near you!
Posted by Sarah Stevenson at 12:10 PM
Labels: AF, Fantasy/Sci-Fi, Middle Grade, Reviews

I'm glad you liked Darius--he was my nominee for the mg Cybils!

I did! Much more than I expected, actually. It was a very sweet story.

I just read your descripton of Diamond of Darkhold aloud to another person. As I went along, he kept shouting, "I've read that! Yes! I've read that!"

I'm still freaked out about the Ember movie (and glad that the author chose to go on with the series so that it's a palate cleanser)...