There's a good chance that I'm one of the few people in my cohort of Cybils SFF judges who reads books with an eye toward whether or not they'd be good in a classroom setting. You can take the chick out of the classroom, apparently, but there's not so much chance of removing the classroom from the chick. I don't know if I'll ever get over the idea that teaching should be made up of moments of brilliant discussion with students - it's a nice dream, isn't it? But mostly I spent time trying to a.) get people to read their assignments, b.) taking away cell phones, and, c.) trying to get people to read their assignments.

If I'd had books like these, I think the whole "Do Your Reading!" rant would have happened a whole lot less often... 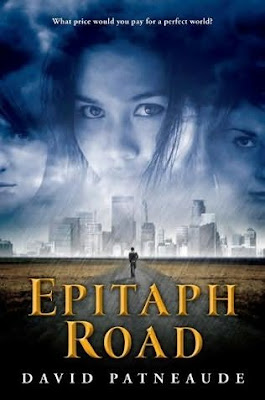 Epitaph Road, by David Patneaude: It's the future, 2097, and a calm future it is -- no poverty. No war. No crime. It's a future with a paucity of options, however, at least for men. They're the smallest portion of the population, and their unimportance is reinforced -- by having them travel with minders, by keeping them out of certain fields of work, and by treating mothers so that they only bear a limited amount of boy babies.

Elisha's Bear is the disease which wiped out the population of men, 'til they were only 2% of the population, and since the world was so, so, so bad, due to the mismanagement of the planet by men, the women took over. And remain in power. Probably forever. Every time men gather in large numbers, the disease reawakens. There may never be large groups of men, men in families, men in business and the public life, ever again.

The men who have bucked the trend move into the woods and the mountains. Kellen's Dad, Charlie, is one of these, and lives on his fishing boat near the malecentric community of Afterlight. Kellen really wishes he could too, but he's living with his mother, who has expectations for him. In a household of women and their children, Kellen is the only boy.

When his mother's boss, a highly placed member in the government, shows up at the house, Kellen's eavesdropping reveals a shocking piece of information that convinces him that he needs to go to Afterlight, immediately.

This dystopian novel may very well be as popular in schools as The Giver. It is absolutely gripping - and covers a lot of ground. Themes of gender and group identity, history, community, matriarchy, feminism, and genocide could start some great classroom discussions.

Cloaked in Red, by Vivian Vande Velde: Normally I don't bother reading forewords or author's introductions to a novel until I'm finished with said novel. (Sorry, authors who write them, but we readers are difficult beasties.) I made an exception for this slim Vande Velde volume, because the novel itself was so short. It was a good call. The foreword was hilarious. The rest of the short pieces were not necessarily as funny or straightforward, but I still think this would be a great book to introduce a unit on writing fractured fairytales for an English lit or creative fiction class. Eight short stories which seam-rip and resew Little Red Riding Hood's traditional tale into something that makes more -- or less, depending on the story -- sense than the one we know.

My favorite of the eight short stories was Why Willy and His Brothers Won't Ever Amount to Anything. Strange, imaginative, obnoxious Willy, always coming up with the wrong end of the stick. What else is the boy to do but become a writer?

A quick, very quick read. This one was a bit short for me, but it not only works well for younger readers, it's the perfect size to be stuffed into a stocking, for those already on the move for holiday books. 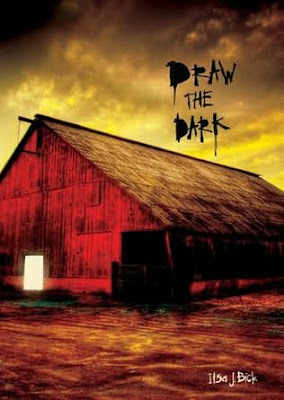 Draw the Dark, by Ilsa J. Bick: Before I get into what I actually liked about this story, let's have a word about the cover. It's somewhat horrendous. Yes, the barn is germane to the story. Yes, a sort of low-grade spooky is a good thing. However, I tend not to gravitate toward blood and gore and the drippy title font didn't make me feel very confident as I embarked on my relationship with the story. The cover doesn't match the book, to my mind. I was prepared for Saw II, and fortunately, this isn't it.

It's not all that calming to the younger residents of Winter, either. Christian Cage lives with his uncle, the sheriff, because his father disappeared, and then his mother vanished, too. He's looked upon with a mixture of pity and fear, since his second grade teacher attempted suicide, and named him in her goodbye note. Christian has been dreaming of terrible, terrible things, and he's started drawing his sleep. He's drawn something awful and insulting on a barn outside of town. And Christian is now afraid that what he draws, dies...

You might not see this one as a classroom novel, and admittedly, low-grade horror would be a stretch for some. However, this novel is based on historical fact: that many small towns in the U.S. were places where German prisoners of war were sent after they were captured during WWII. They lived and worked peacefully in these small towns, and in some cases, stayed on after amnesty.

That's not quite what happened in Winter, however. Not quite...

An intriguing novel which would open up discussion on art, psychology, reality, dreams, WWII history, prisoners of war, and the dynamics of small towns. It would really liven up an English class, for sure!

Other fine Cybils nominees which could find good homes on a suggested reading list include Chelsea M. Campbell's THE RISE OF RENEGADE X, at The Book Smugglers, THE REPLACEMENT, by Brenna Yovanoff, reviewed by Liz at the School Library Journal Tea Cozy, and BRIGHTLY WOVEN, by Alexandra Bracken, ably reviewed at The Story Siren.

You'll find EPITAPH ROAD , as well as CLOAKED IN RED, and the spooky-but-not-too-gory DRAW THE DARK at an independent bookstore near you!

All three novels received and reviewed courtesy of their respective publishers.
Posted by tanita✿davis at 9:29 AM
Labels: Cybils, Fantasy/Sci-Fi, Reviews

Oh, man, these sound good! I'm pretty sure I read something about Epitaph Road on another blog (Jen's?) but I can't quite remember where. You know I can't resist a good dystopian. I keep thinking I'll get sick of them, but no....

I think Ilsa Bick was at the Kidlitcon, but I didn't get a chance to talk to her! :(

Thanks for putting Epitaph Road on my radar. I am also a sucker for dystopic visions. I love the fact that I can't guess the outcome from the premise.