Pirates! Murder! And Light Romance! The Bird of the River by Kage Baker 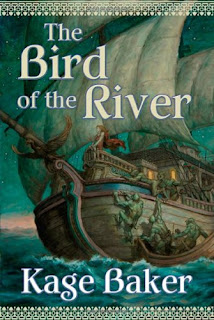 I hadn't heard of fantasy author Kage Baker until a friend mentioned her latest book to me, The Bird of the River. I borrowed it, and liked it—a lot more than I expected to. It's one of those books that kind of grows on you after you've put it down and thought about it a while.

Which makes it a cryin' shame that the author died this year. On a more positive note, she's written quite a few books, including a few I've even heard of (by title if not by author's name)--The Anvil of the World, The Empress of Mars. I, for one, will be looking for more of her work.

The Bird of the River was, I believe, released posthumously. It was her newest fantasy work, set in the same universe as The Anvil of the World. As this was my first entry into that universe, I wasn't sure if I'd be at a disadvantage for not having read the other books. However, I didn't feel lost at all; the book works well as a stand-alone. Baker provides a measured introduction to the world through the eyes of its characters, specifically the main protagonist, the teenaged Eliss.

We start with Eliss and her family—her mother, Falena, and her half-brother, Alder—in an unfortunate situation: Falena is a drug addict, and she's using again. Hoping to help her mother get clean, Eliss finds Falena a job as a diver on a river cleanup barge, the Bird of the River.

In this universe, only women become trained divers. The crew of divers on the Bird of the River are responsible for clearing debris from the river as the ponderous craft wends its way upstream and then back down. But when Falena dies (don't worry, that's not really a spoiler; nothing you won't find on the dust jacket copy), Eliss must fend for both herself and her brother. She goes to work in the crow's nest, spotting river obstacles and...a few other not-so-routine things.

There are a lot of subtle themes at work in this piece. Eliss's younger brother Alder is half Yendri, a different race. Issues of mixed race and of fitting in, of dealing with prejudice, are woven throughout the story. There are some very interesting questions of social class brought up, too. Eliss, now an orphan with nothing but her job and her life on the boat, befriends a young man who comes aboard: Krelan, who moves in highborn circles. He's a member of a family that is sort of like...butlers combined with the Mob. His family is born in servitude to one of the noble families, meaning they are sworn allies and bodyguards, and also carry out the family's dirty work. And he's on a quest to carry out some of that dirty work right now...

...which brings me to my next point: there's plenty of action, too. A mysterious murder, a disappearance, pirates, demons, demon pirates, raiding and pillaging, sneaking around in disguises—there's plenty here to please readers who enjoy the adventure aspect of fantasy. At the same time, one of the things I enjoyed most about The Bird of the River is the overall feel of the book—the story has a flowing calm rhythm, even with all the action. It's very fitting--a perfect way to tell the tale of Eliss's life on the barge meandering upstream, city by city, following the curves of the river and slowly coming into her own as a capable, compelling person. I really enjoyed this one. Though it doesn't seem specifically marketed as a YA book, it definitely fits for both teen and adult audiences, and it's encouraged me to look for the author's other work.

Buy The Bird of the River from an independent bookstore near you!
Posted by Sarah Stevenson at 8:00 AM
Labels: Adventure, AF, Crossover, Fantasy/Sci-Fi, Reviews

LOVE Kage Baker. Love, love, love, LOVE her work, and I was heartbroken when she died. I'm so annoyed because the library here is so lame that they have only a few of her books - and none of her adventurous stuff. I've not heard of these titles, and now I'm on a serious hunt.

This sounds like great fun. Thanks for a fabulous review. :)