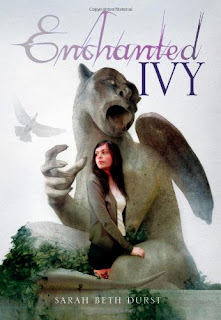 Source: Was offered a review copy by the author and received it from the publisher.

This book is a 2010 Cybils Fantasy and Sci-Fi nominee.

Love at first sight. Nope, I'm not talking about falling in love with some compelling and handsome member of the opposite sex, although there are not one, but TWO lust-inspiring love interests in Sarah Beth Durst's latest novel, Enchanted Ivy. I'm talking about that experience of visiting colleges when you're a teenager, when you find yourself at that one school you just know in your bones is the place where you want to spend the next four years of your life.

According to the insert that the author included with the review copy, she herself felt that way about her alma mater, Princeton (where the book is set). I definitely related to that feeling. I felt that way about Berkeley, maybe because my mom graduated from there, too, and we often went back to visit. It's a similar situation with Lily Carter, the main character of Enchanted Ivy, only it's been multiple generations of her family that have attended Princeton. And it's HER dream, too.

So, obviously, Lily's overjoyed to attend Reunion weekend with her grandfather, and amazed that she's been offered an opportunity to take the Legacy Test—a top-secret test that, if she passes, will guarantee her admission to the school. But her assigned quest—to find the Ivy Key—leads her to discover a wondrous, magical Princeton coexisting with the ordinary one she already knows. There, the gargoyles aren't just whimsical historical statuary—they're real. And other, less charming creatures are real besides. Her quest ends up being a lot more dangerous than she bargained for, with two love interests on opposite sides of the conflict competing for her attention, her own family at risk, and out-and-out war between the magical and the mundane becoming increasingly likely.

What could have been a somewhat indulgent and nostalgic exploration of the excitement of preparing for college is, in fact, an adventuresome and charming story that catches the reader up in the sense of anticipation that anything could happen when you leave for college. ANYTHING--up to and including magical battles and handsome were-tiger boys. There's a little bit of everything in this story: adventure, romance, family drama, magic...and the more ordinary magic of discovering who you are and how many possibilities lie ahead.

Buy Enchanted Ivy from an independent bookstore near you!
Posted by Sarah Stevenson at 11:34 AM
Labels: Adventure, AF, Fantasy/Sci-Fi, Magical Realism, Reviews

Excited to read this one for Cybs!

I'm looking forward to this one lots too!