This just in: according to the San Francisco Chronicle and followed up with a piece on the ALA website, there's a new award in town. Actually, it's not new -- the ALA's been giving this award out since 1971, but this year they've decided that to add onto it. From the site:

The Stonewall Book Awards are given annually to English-language books of exceptional merit relating to the gay, lesbian, bisexual, and transgendered experience. 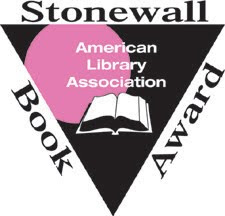 Congratulations, Nick Burd. I'm happy to see this new award, but know that there will be those with questions. Like those who struggle with the idea of the Coretta Scott King Award, it troubles some folks to think that we need awards for specific races and now gender orientation. Like the man I met at the YALSA speed-dating gig who said brusquely, "Well, I've never won that one," when I told him why I was there, I may never win this one -- although, unlike the Coretta Scott King Award, you don't have to be of gay or lesbian preference to win this one, unless there's fine print I haven't found.

-- but either way, not the point. I'm just a little startled and pleased -- according to national statistics, about 14 million children have a gay or lesbian parent. The need is there, and now the writers will be further recognized. Well done, ALA.
Posted by tanita✿davis at 11:31 AM
Labels: Book News, What We Do

Great! I think that this is an important one, too.

And, re: your YALSA speed date, hmm--do some people feel like they have to win EVERY award? What a weird reaction. At this point I'll be happy with some positive reviews!!

It really is important. Aside from increasing awareness and encouraging publication, awards help when books with GLBT characters are challenged, which is a frequent issue. There are a disturbing number of people who think the presence of any character who is homosexual is a reason to limit a book's access; most of the challenges I've dealt with are over this.