"It's All Over, Over Here," or Glaswegian Dystopia

2099, and the waters have risen on the island of Wing where Mara lives. Her family sees friends and loved ones -- and their homes -- swept out to sea, gone. They flee in boats, with the idea that somewhere there is higher ground. They arrive at what once was a great city, and find themselves refugees in a horrible situation -- a city bent on keeping them out, a lawless, chaotic raft-town, with water at exorbitant prices, and rampant sickness and death. Mara escapes -- but only just -- into the city, and finds there's both answers and opportunity -- and nothing for her there.

Aquafortis reviewed Exodus last summer, and I was intrigued to read it, and realize that it was about... Glasgow. All the neighborhoods, interlinked cities and towns and landmarks are used as character names, and even the bird, tree, fish and bell symbols from the city's crest are etched on the first page of every chapter. It was strange to read about a city with which I was just getting familiar -- in a more surreal way than even I saw it. The strong environmental message, with which some readers have struggled, was softened for me by the quirky glimpses of familiarity. 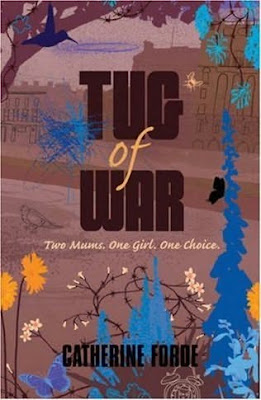 Apparently, Glasgow is a good city in which to set a dystopian end-of-days kind of story. Catherine Forde's Tug of War is a MG title which hearkens back to WWII, when refugee children were sent away from large cities, often with only a label around their necks, identifying them by name. Separated from family and often siblings, they were housed with total strangers, whose fitness for childcare was often only hastily assessed.

The Emergency came in 2012, on Capital Day, and a year on, the terrorist attacks and bombing back and forth has been nonstop. Glasgow as a ship building city is a prime target, and it's plain dangerous to stay. Molly Fogarty and her older brother, John, are being parent-evacuated -- the safest thing, her parents think, or else the Parliament will come up with an evacuation plan as disorganized and slapdash as evacuation during the Blitz. At least, if they put them out in the country with friends of friends -- people Dad knows from someone in Accounting -- they'll know right where they are, and there can then be no mistakes, no slip-ups, no problems. Right?

Molly and John are precious to their parents -- who are almost sixty, and had kids late in life. And though they're a regular family, and find each other aggravating and embarrassing, this separation is hard on all of them. Molly's mother takes most of her clothes out of her suitcase, filling it with toilet paper and canned beans, in fear that where her children is going will be worse than where they are. Molly and John find that they won't be housed together. John will be on a farm a few miles down the road, working for the amusingly named Will Nott, and Molly will be on Paradise Farm with Nilly and Phil Pearson. Molly wonders what will happen if she hates things.

But Molly's worries are groundless. Nilly and Phil are, of course, lovely. Loads of lovely. Unlike her own mother, Nilly is slender and beautiful, always perfumed and perfect and full of laughter and fun. And Paradise Farm is great -- no power outages, fresh indoor running water, and amazing and tasty farm food. Eggs! -- and milk! No more powdered crap. Molly is instantly beguiled by this place -- but when Nilly takes her shopping, paints her nails, and has her hair done, she's even more excited. Nilly is her teacher -- and turns into Mrs. Pearson in the classroom -- but she's still fabulous. And she just loves Molly so much.

So, why doesn't Nilly like Molly to write to her mother?
And why won't anyone let Molly see John?

**Spoilery Diversion, Highlight to Read**:
Mature MG readers will figure out long before Molly that Nilly has an agenda. When Molly hears from a schoolmate that John is "having a hard time," and when she sees him for the first time and he's sporting two black eyes, I expected her to go into hysterics and demand to see him. Obviously something is wrong. However, Forde writes Molly as a character very easily bought, who can easily set aside any concern for her brother in the face of the luxury in which she now lives. I don't buy that. Kids today are pretty savvy about stranger danger and abuse -- and slavery. How can Forde expect that in 2012 and beyond it would be any different? I think she doesn't give her middle grade readers enough credit.

The bombing continues in Glasgow, and Paradise Farm isn't a place where bad news is heard, but Molly knows things are bad. When a final disaster brings Mrs. Fogarty to escort Molly home, she's faced with what is, for her, an agonizing choice. Nilly wants to adopt her. She could have everything she wants, forever, and can forget about and ignore the post-apocalyptic nightmare her home city has become. Or, Molly can go back to it all. The choice is up to her.

Forde explains that this novel is based on her mother and grandmother's experiences in the WWII evacuation -- which must have been harrowing. Tug of War is a quick introduction to dystopia for middle grade readers, and will pique their interest in other parts of history.

You can find both the YA novel, Exodus, and the MG tale, Tug of War at an independent bookstore near you!
Posted by tanita✿davis at 12:15 PM
Labels: Adventure, Realistic Fiction, Reviews

Tug of War sounds really good! I'll have to look for it.

I just brought home a HUGE pile of books from the library yesterday, and I told myself, "No more! Put no more on hold!"

But now I put this one on hold. I have no willpower.

I'm tempted by both of them just because of the Glasgow connection. I can't resist books set here.

I'm with ya, Ali. It's a treat to read and go, "Ooh! I know where that is!" These were both at the Mitchell and Hillhead libraries.