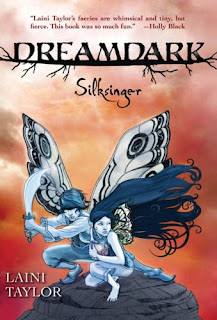 If you enjoyed the first book in Laini Taylor's series about the Faeries of Dreamdark (which Holly Black aptly described as "whimsical and tiny, but fierce"), you won't want to miss the second one, which in my opinion surpassed the first in terms of absorbing me into its unique and vividly depicted adventure.

Speaking of hidden identities, there's also Hirik, whose path parallels Whisper's in more ways than one—and they could help each other, if only each knew the other's secret. And underneath it all—literally, under the ground—the poor, pathos-ridden snail-demon Slomby toils as a slave, made to suffer for his tender-heartedness in caring for the last of the captive firedrakes. And if he doesn't do his job, his ruthless Master wouldn't think twice about making him suffer even more. To complicate matters, that same Master is on a quest of his own, to track down the Azazel for himself.

This sequel has not only an intriguing and sympathetic cast of characters, it also masterfully weaves together a number of parallel storylines while maintaining a high level of tension and somehow combining faeries with massively swashbuckling adventure. And, as always, the illustrations by Jim DeBartolo are distinctive and fun. Ultimately, though, I guess I just like the idea that the tiniest, most seemingly innocuous creatures are destined to save the world.

Buy Dreamdark: Silksinger from an independent bookstore near you!
Posted by Sarah Stevenson at 12:31 PM
Labels: AF, Fantasy/Sci-Fi, Reviews

Was an AWESOME book. I had the joy of sitting down and reading straight through both, so I'm having Magpie withdrawal.

Once I worked up the courage to read the first book (I was desperately afraid at first that Laini had written my story, only better!) I became an instant fan. Can't wait for Silksinger and am thrilled to hear you think it surpasses the first one!

I really enjoyed it--I don't think my review quite does it justice, because I let a lot of time pass before I actually sat down to write it. :)

I loved this one too!

Very nice, thanks for the information.