Reviews Roundup (aka My Library Books Are Due TODAY)

I did the Bad Thing of devouring a whole load of books without doing writeups in between like I should, so here I am left with a short stack (mmm....short stack) that I really need to deal with before I take them back to their rightful home. So, without further ado, here are some quick capsule reviews for you.

E. Lockhart is a definite favorite after The Disreputable History of Frankie Landau-Banks, one of my favorite YA books of last year. Her Ruby Oliver books are great fun, too, though perhaps not quite as epic or quite as brilliantly clever as the inimitable Frankie. The Boy Book--sequel to The Boyfriend List--continues the traumas and dramas of Roo, her ex-friends, current friends, potential romances, life at a tiny Seattle prep school, and adventures in therapy. Her neuroses are described with a lot of humor, but there's a serious side to the story, too. It strikes me that this would be a great set of books to hand to readers who are looking to branch out from series fiction but enjoy school/friendship/romance themes.

Buy The Boy Book from an independent bookstore near you!

I know you've probably heard just about all you can stand about The Graveyard Book, but Neil Gaiman's latest deserves every award and accolade it's been given, in my opinion. His brain must be specially jacked into the source of good stories. Anyway, the story of Bod—Nobody Owens—is an unconventional coming-of-age tale with a lot of classic story and folk tale elements that avid readers will recognize and enjoy. Most of all, though, it was the characters I fell in love with—characters who, for the most part, are no longer even among the living, but nonetheless fully realized, varied individuals. I adored just about every one of the "good guys," was creeped out by the bad guys, and was even thrown for a loop a few times as far as motives were concerned—but in every way I was convinced and willingly enthralled. And, of course, I loved the illustrations by Dave McKean, who's quite a visual storyteller in his own right.

Buy The Graveyard Book from an independent bookstore near you!

Can I just tell you how relieved I was when, at the end of Laurie Halse Anderson's Chains, I learned that there's going to be a sequel? The year is 1776, and the seeds of the American Revolution are already beginning to stir and sprout. Isabel is thirteen years old and her sister Ruth just a child when their owner dies, leaving the two of them free. The only hitch is their owner's cruel nephew, who refuses to recognize their freedom and instead sells them to equally cruel Loyalists in New York City. Isabel learns, among other things, where her loyalties truly lie and what "freedom for all men" really means for a slave girl. She's a compelling character—loyal and brave, plucky and smart, but sensitive enough to retain her humanity and sense of what's right through some truly traumatic experiences. I enjoyed this portrait of the conflicted beginnings of our country, too—similar to M.T. Anderson's Octavian Nothing books, Chains shows the multifaceted complexity of a subject that tends to be taught rather one-sidedly in schools.

Buy Chains from an independent bookstore near you! 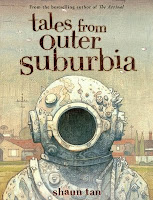 Lastly, an author I've been meaning to check out for a couple of years is Shaun Tan, and I finally ran across his collection Tales from Outer Suburbia at the library. I was not disappointed—if you're a Neil Gaiman fan, or a fan of Nick Bantock's Griffin and Sabine stories, you might enjoy this set of not-quite-graphic-stories, not-quite-simply-illustrated-tales. In some, like "Eric" and "Distant Rain," the imagery forms an integral part of the story and lends a dimension or adds information that the text alone does not provide. With other stories in the set, the illustrations are simply that—gorgeous, atmospheric, and stylistically varied accompaniments to the written text. The stories themselves are surreal, strange, and often inspire more questions than they answer. They're much more than vignettes about life in the suburbs—the phrase "outer suburbia" is a great one, reminding me of the TV show "Outer Limits" and the idea that the odd and unexplained might be right under our feet—or in our suburban backyard. Tan has a unique vision, and I look forward to more from him.

My goodness. I feel disappointed in me, once again, for my slow going through book piles while there are those of you who read like, well, like you read. How do you do it? I wish I had read all these books.

Great idea for a review roundup! I'm feeling a little overwhelmed with my pile of books needing reviews. :)

Good to know about the Lockhart books, too. I loved Frankie so much!

That sounds like a good list of books to get stuck into. I have The Disreputable History of Frankie Landau-Banks sitting at the ready on my bookshelf.

I'm an illustrator and author of over 50 books of every sort for children.... www.johnnez.com

I'm happy to announce my new book just out this May titled 'Cromwell Dixon's Sky-Cycle'. It's written and illustrated by me, John Abbott Nez, and is published by G.P. Putnam's Sons.

‘Cromwell Dixon’s Sky Cycle’ tells the amazing true story of America’s forgotten ‘Boy Aeronaut’, who actually built and flew his own flying bicycle over the skyscrapers of Columbus, Ohio in 1907. This is a real ‘boy’s book’, filled with amazing home-made inventions in Cromwell Dixon's workshop.

It's a true story of adventure, determination, courage and perseverance. I'm happy to say my new book has had very good reviews and I'd be thrilled if you looked it over and would consider a mention on your blog.

1907 was an amazing age. It was a period when an obsession with flying swept the nation. For the first time in history people were flying and even building flying machines in their own backyards. I'd hope it might encourage today's children to get out from behind their computers and go build something out in their backyards.

I've made up a website for my new book with images and a book movie trailer at: