On the Inside: Slob by Ellen Potter 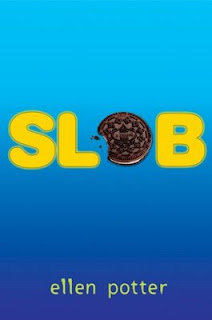 Owen Birnbaum is twelve years old. He's smart--super smart--and has a weird but cool friend who sells Tibetan dumplings from a cart. But he's also really overweight, he has a younger sister who has changed her name to Jeremy and joined the Girls Who Are Boys club, and he's tormented on a daily basis by his sadistic gym teacher.

Life didn't used to be so hard, but after tragedy struck his family, things just kind of spiraled downward. And now, on top of it all, somebody at school keeps stealing his Oreos. The prime suspect seems to be new kid Mason Ragg, who has a scary scar and an even scarier reputation. But the more Owen tries to find out who's stealing his cookies, trying to set traps for the thief and enlist help from his friends, the more he finds out that the people around him aren't quite who he thought they were. Even scary, scar-faced Mason Ragg.

There's a fun mystery angle to this book, a lot of humor, and a lot of depth. Owen is a likable, very human narrator whose rather pathetic situation sparks the reader's sympathy right away, but whose inner strength shines through more and more as the story goes on. But more than anything else, Slob by Ellen Potter is a story about the myriad and complex ways that who you are on the outside is not necessarily reflective of who you are on the inside.

You really have to draw a line when someone's stealing your Oreos.