Out There: The Forest of Hands and Teeth by Carrie Ryan 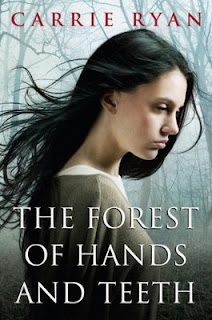 In the interests of full disclosure, I should mention that I'm really not a fan of the zombie genre, for a variety of reasons. However, I AM a fan of post-apocalyptic stories, which is why I picked up Carrie Ryan's The Forest of Hands and Teeth in the first place. And I have to say that ultimately, this is less a novel about zombies than it is about faith—and learning to tell the difference between mindless and unquestioning belief imposed from outside, and faith in what one knows to be right.

Mary lives in one of the few villages now left—the only village left, according to the Sisterhood and Guardians that keep order. The village is surrounded by wire fencing to keep the Unconsecrated out. If an Unconsecrated infects you—by bite or scratch—you're doomed to become one of them. It happens now and again, and it happened to Mary's father, who used to be a Guardian patrolling the fences for breaches. According to the rules, he was put outside the fences and now he's a slavering, undead animal just like the rest, always hungering for human flesh.

But all of that is really just setup for the real story. When tragedy strikes again and Mary and her brother are left orphaned, in her heart of hearts Mary starts to question everything she's been taught about the way her world works. And when she learns there may be a world outside her village, somewhere, and that the Sisterhood and the Guardians aren't necessarily telling the whole story, she must figure out how far she is willing to go--both mentally and physically--to discover the truth.

This book is well written and far more complex than it appears on the surface, with themes of adventure, romance, and self-discovery that are heightened by the somewhat dark and monochromatic world that Mary inhabits. Then, when color bursts in, it's all the more striking. Pretty darn good for a zombie novel. And cripes, what a great title.

Buy The Forest of Hands and Teeth from an independent bookstore near you!
Posted by Sarah Stevenson at 10:57 AM
Labels: AF, Fantasy/Sci-Fi, Reviews, Suspense

I really loved this book. I think GOOD zombie stuff is more post-apocalyptic in tone than silly, although, that said, I do love watching silly zombie movies from time-to-time.