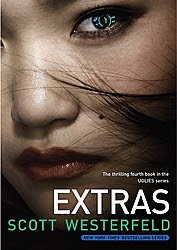 You thought that Specials was the final adventure in Scott Westerfeld's Uglies series. You were wrong. You haven't seen the last of Tally Youngblood. However, the newest book in the series, Extras, isn't Tally's story. It's a new age, a few years after Tally and her Special friends brought about the end of the Prettytime, and new protagonist Aya Fuse is a product of her changed, changing world.

Now, take the idea of blogging. Take the idea of expressing your opinions for the world and ranking your posts on Technorati and becoming the Nth most popular blogger in cyberspace; take that idea and fast-forward it a few centuries into the future and take it to the limits of sanity. Then you'll have Aya's world: a society in which you mean nothing unless you've cracked the top ranks of story "kickers," a city in which your personal worth is determined by your "face-rank" as a kicker and by the merits you receive from performing your civic duties.

In a society like that, Aya, just fifteen, is hardly one of the glitterati. In fact, she's an extra, a nobody. Until she finds out about a group of girls with a shocking secret pastime, and she realizes that she just might have stumbled on the story of her life. But as she gains their trust (and gains some killer footage for her story), the entire group discovers an even bigger secret that might be truly killer: it might mean the end of the world as they know it.

This is an exciting, fun, fast-paced companion volume to Tally's story, and yes, Tally does make an appearance. I especially enjoyed the unabashed critique of our fame-hungry, reality-TV-obsessed, self-centered, appearance-focused society and Westerfeld's vision of what might happen if that ever went out of control and beyond the pale. Fans of the series should enjoy this latest book.
Posted by Sarah Stevenson at 11:18 PM
Labels: Adventure, AF, Fantasy/Sci-Fi, Reviews