Echolocation in the International Year of the Bat

I absolutely love how everyone has a theme for this year. According to my calendar, it's the International Year of the Bat, and with that in mind, may I present to you the first SQUEALworthy (or "squee"worthy which is more batlike, and really more the sound I made when I read this) event of the year: The Teens & Kids Fantasy & Science Fiction Convention. This is in its nascent stages, and is the brainchild of one TAMORA-my-idol-Pierce and Julie Holderman. 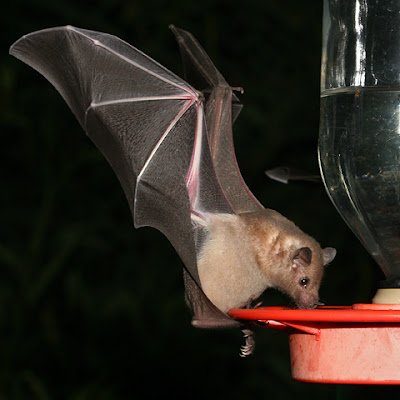 (YES. That is a bat at a hummer feeder. I happened upon this coolness here.)

A YA Fantasy/SciFi Convention? People: How cool is this, really?
I've never been to a Something-Con in my life, but I've always thought it would be fun to go. I read Maureen Johnson's blog this past year, about her getting ready to go to some science fiction thing and wear a (very scary) costume. It sounds like so much fun for ...um, non-costume wearing, lurking, observant introverts like me.

Okay, never mind.
Seriously: It sounds like such a great idea. So, why don't the REST of you who are all about costumes and craziness -- and especially those of you who were so awesome with the Kidlit Bloggers conference, and who know how to do these things: a.) drop by Tamora Pierce's site and give her some ideas, b.) start thinking about who you'd want to hear at a conference like this, c.) join me in squealing.

And this really does fit with the International Year of the Bat: every conference, convention and convocation of readers and writers and bookish types is like...echolocating. So we fantasy and science fiction book nerds can all find each other.

Wow. The Class of 2K8 officially begins. Though I didn't join, that's a reminder that my book is out this year, too.

Via Galleycat: Have you heard the story of the guy with the imaginary publicist? Oh, WOW, could you imagine doing this? Troy Tompkins claims he merely used "every trick up his sleeve" to attract the attention of Simon & Schuster with his self-published YA novel, including signing his "press releases" with a fake name, so that it appeared that he had a publicist.

Some people are fairly peeved that he's won himself a hefty contract out of it (one guy mentioned that it was a "bad message to aspiring writers" but do you honestly feel like you've been put on earth to give messages to other writers? Maybe the point we're missing is that this is a YA novel... is this a message-to-YAers thing, here? Do we as YA authors stand in as examples... maybe that's a whole 'nother blog topic...). What do you think: did he benefit from a lie, or is that part of vigorous self-promotion? I have to admit that I would not have the chutzpah to do that -- but lying gives me hives... not because I'm not good at it. I'm very, very, VERY good at it (I'm a writer, after all). But I always like to begin as I intend to go on... I don't think I'd do it. You?

Sara has posted about the best advice for the new year that I've seen yet: plan for failure. No, don't plan to fail, have a Plan B. for when things go completely "pear-shaped" as the Brits say, and the Universe says no to your carefully thought out plans. And since this is Sara we're talking about? Her Plan B. sounds remarkably fun. Could it be that there's no real failure in failing... unless you don't acknowledge that not getting things done the way you want can teach you something you didn't know?

Hm.
Posted by tanita✿davis at 7:43 AM
Labels: Random Notes and Errata, Views

Congratulations on your new book! When will it be released? Happy New Year!

WOO HOO for your book!

Boo to the liar.

The slightly evil part of me is amused at the fake publicist thing, though I'd never, ever do it. I guess the danger lies in the public judging all YA authors by his actions, though one would hope they wouldn't.

YAY, YEAR OF THE BAT! I love bats. I have a Bat Thing. I just think they're neat. I was so happy when they were included on the Post Office's "Pollinators" stamps. (I really was.)

It makes me equally ridiculously happy that someone else loved the Pollinator stamps!!!!

Talk about echolocation. Dude, we are both SO weird.

The fact that you can use the word echolocation in such a casually appropriate and witty way in your blog post...well, it makes me want to squee! squee! Word nerds unite!!

The SF/Fantasy Con for YA sounds awesome too. A lot of my friends in college went to Cons, but there's way more that could be done for younger ages.

When are you going to start posting more about your book? I feel like I know nothing, except that I heart the author already.

Maybe blogging is another form of echolocation?

Hey Vivian! Book will be released in late May/June. I'm hoping to have more good news of that sort soon!

A.F. -- The fact that the fake publicist author is a minority is being batted around as being one of those "well, the publishing world is geared toward the dominant culture, so he was only doing what he had to do," but I don't know -- that whole thing makes me uneasy. More than just painting all YA authors, he's brushing some pretty thick tar on minorities, perhaps. I don't know...

Sara, the YA Con-thing is for writers who write for that age group, not just for the kids. Again: fun times!

Awww! Thanks for the love. I don't know what to post about the book, except ...I'm waiting. I'll try and think of something!!!

I love bats. I'm glad the year of the bat has finally rolled around again.

TadMack, I feel like a total nope (allusion to The Witch Family), but I know you've written a book-- just not what it's about. I'll look around in archives, but if I can't find info, please tell me! This is all very exciting, of course.

The guy who faked his publicity sheets reminds me that I have a friend with two self-published books. She uses her married name as her author name, and her maiden name as her publicist. Both have the same first name. I'm sympathetic to the frustrations of feeling one has to jump through hoops that are set up merely to trip people. I'm not decided yet on how I feel about Mr. I. M. Imaginary-Publicist.

Congratulations on the book! See you on the shelves soon!

And thanks for mentioning 2k8.

As for bats...well, I've had some ver-r-r-ry interesting experiences with bats--some of which got me started writing, so I have to be grateful to them.