When I was a kid, we had ducks. We had dogs. We had pigeons. We had chickens. Occasionally, we had hamsters, crawdads, and the neighbor's bunnies and goats. I grew up in a suburban zoo, apparently, so the title of this book made me smile and want to read it. I don't have chickens right now - and I'm not sure I'd want chickens like these!

Synopsis: Sophie is twelve, and a new arrival from LA into the wilds of Sonoma County. Her mother is a freelance writer, working frantically to provide the family income. Sophie's Dad got laid off from his old job - which is one of the reasons why they've moved to her great-uncle Jim - on her father's side - farm. The other reason is that he died, and left it to the family in his will. Sophie's family has no money, and nowhere else to go - and they're going to make the best of this place.

Sophie's loneliness stems from missing her bestie, LaToya, and her Abuelita, who passed away before they left LA. She's afraid she won't make new friends, and then she finds... a chicken. A kind of angry chicken, really, which glares a lot, and ... occasionally does other things that Sophie's not sure of. Writing a letter to Redwood Farm Supply in Gravenstein makes perfect sense now, because Sophie's hopeful SOMEONE will be able to tell her how to care for the chicken, which Sophie names Henrietta and reads to daily. Through trial and error, and working hard like her Abuelita always told her to, Sophie makes a start on things. Agnes at Redwood helps... but her typing is kind of awful, and she's sporadic help at best.

And, it seems like someone is trying to steal Sophie's chicken already!

Through the kind auspices of the mailman, the boy down the road, and with a little help from her poultry friends, Sophie finds her way through the first summer on Blackbird Farm, and provides readers with a lot of humor along the way. 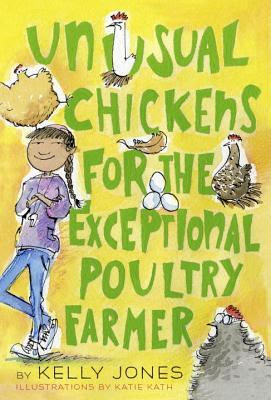 Observations: This is kind of prime Middle Grade fiction to me - extraordinarily creative, gently amusing, and a quick read. Sophie is lonely, and a little sad, and readers will sense that her curiosity about her new home is leavened by this - and by her parents' fears for the future, and their own grief and losses. I like that Sophie is a quick study - she knows that there is Stuff Going On with the adults, and while it doesn't totally derail her, she's fairly convinced that figuring things out on her own is her best bet.

Middle grade books seem specially geared to doing well with dealing with loss. Sophie's hole-in-the-middle feelings from losing first her grandmother, then her best friend are detailed well, and the slow evolution of strangers-to-friends she experiences with the boy from up the road and the girl she sees in the library will remind readers of how friendships begin: slowly, over time, and silences are bridged with smiles, even when one doesn't have words.

Additionally, this is a fun prompt to get people to libraries! Sophie sympathizes with her father, whose delayed grief - and guilt - from growing up with his great-uncle Jim, and then never visiting him again, and STILL inheriting his farm, leads him to try viticulture, even though he doesn't know what he's doing. Sophie shows him an excellent example when she goes to the library and finds A BOOK and READS about caring for chickens. It takes him a bit, but eventually, he catches a clue. Sophie actually checks out books for him, and soon he signs up for a viticulture class on his own.

Conclusion: The matter-of-fact inclusion of fantastic or mythical elements into seemingly realistic fiction is the basis of surrealistic fiction and magical realism, and because Sophie is Mexican-American, I think that label fits for this story, at least partially. A lighthearted, funny and creative book, this made me want to have chickens again someday, and probably will lead every twelve-year-old who reads it to have at least the tiniest twinge of wanting a chicken - or six - for pets.


I received my copy of this book courtesy of my local bookstore. You can find UNUSUAL CHICKENS FOR THE EXCEPTIONAL POULTRY FARMER by Kelly Jones at an online e-tailer, or at a real life, independent bookstore near you!