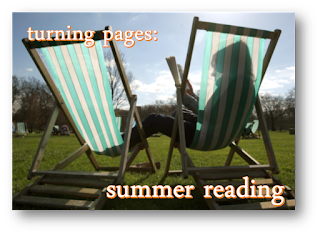 It's another Erin Kelly book! I heard a lot of good things about this book from the Cybils crew last year, and was happy to read it. Also, not gonna lie, the title does good things for me, because I can just hear that pretty little guitar riff from the Beatles song. ☺ Content commentary: The bullying in this novel seems pretty brutal to some people, but to me, for middle grade, it feels gruelingly spot on. Your mileage may vary.

Synopsis: Chapel Spring, Louisiana, where Apple Yengko lives, isn't the type of place you'd write songs about. Certainly Apple won't do so, when she becomes famous. She's going to run away to New Orleans where she can have a guitar and make her living from it. Of course, she doesn't have a guitar yet. Her mother won't let her get one, even though music is all Apple has of her father, who died in the Philippines when she was only three. Since they emigrated to the U.S., Apple's mother has become the block in the road to a great many things Apple feels like she needs - like pizza and a normal name, and good friends. Why can't her mother understand the Beatles are everything? Why must they always eat pancit? Why can't her mother stay out of her way, and start calling her Analyn?

Apple knows, if she thinks about it, that it's not anyone's fault that she's on the Dog Log as the third ugliest in the school... and now even her best friends believe that she eats dog - and that her tilted eyes mean she's Chinese. Just as her girlfriends are beginning to "date" suddenly Apple is a social pariah - the boys bark at her in the hall as she passes, and her friends, humiliated by her mere existence, first won't speak to her, then actively seem to hate her... but why? Why don't they care that she's actually Filipino, and has never eaten dog in her life? Why are they acting like the Hot List matters, and listening to the boys? Apple's only escape comes through listening to Abbey Road and other Beatles albums. Her father loved the Beatles, and all Apple has left from him is a single old tape. She holds on to that tenuous link between herself and a man she doesn't really remember, and longs to fly away from her life. When she finds out that her class is going on a field trip to New Orleans, one of the only places Apple has ever seen musicians making a living from their art, she knows where she wants to go, to start a new life. Now, if she could just get a guitar...

As Apple's unhappiness grows, and she bends her natural personality more and more to accommodate her friends, she slowly begins to realize what she's giving up - dignity and character, and for what? For people who don't really see her, and want her to be the same as everyone else. Readers will cheer as Apple learns to stand up against bullying and her new friends help her to cherish the self she was throwing away. And finally, like the blackbird song she adores, she flies. 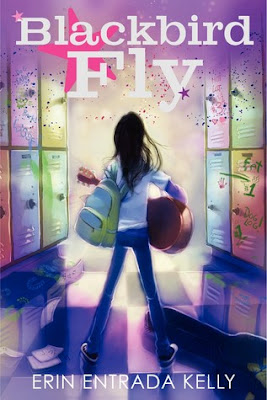 Observations: Erin Kelly writes emotional books - close to the root of one's feelings, allowing readers into the character's deepest inner mind - yet without making the reader feel guilty about things. Apple falls in line with the mean girls, and through her guilty silence, she shares in their worst behavior. She doesn't outwardly believe in the popularity "tiers" as her friend Alyssa does, but she acts like it, making her complicity actually worse. Because Apple doesn't sit in the seat of the Unassailably Right Behavior Judgment Panel like many other bullied characters do, she is realistically flawed - which as a protagonist makes her easier to relate to and to understand.

Despite her complicity, this is recognizably a redemption story. When it begins, Apple is in a place where nothing she IS is okay, and everything she is NOT is what she wants. She wants to be JUST an American, not a Filipino-American. She wants to be fair and blonde like her friends, have "good eyes," which to her meant eyes with no tilt and no epicanthal fold. She wants to throw away her native language and culture. It takes having a friend who has no special link to a particular heritage valuing her language and food and culture for her to be able to see it as anything worth keeping. Additionally, it's significant that he's white and male -- at Apple's school, where she is the ONLY Filipina, other white males are devaluing her for the same reasons Evan values her. As she learns to look at her mother with fresh eyes, her love outpaces Evan's regard for her culture, and she comes back into valuing herself for her own sake again. This is important, and allows Evan to be simply a catalyst for the work that needs to be done, and not the whole reason Apple sees herself correctly again by the story's end.

Conclusion: In middle school, kids are encouraged to step out of childhood and grow into themselves - but no one can reassure them that their "selves" are okay except their peers, who unfortunately are, at that point, jockeying for position and trying to shine as their best selves. It's an exhilarating and awful time - usually with more emphasis on the awful, unfortunately - but Kelly's characters see themselves through this awfulness into triumph, allowing readers to come along for the ride.


I received my copy of this book courtesy of the public library, but it, like all of Kelly's books, is worth not just a Borrow but a Buy. You can find BLACKBIRD FLY by Erin Entrada Kelly at an online e-tailer, or at a real life, independent bookstore near you!