Synopsis: I was drawn to Victoria Aveyard's trilogy--Red Queen, Glass Sword, and King's Cage--because I saw some echoes of the project I'm currently working on and was immediately intrigued. In the world of protagonist Mare Barrow, there are two types of people, Reds and Silvers; and the color of your blood determines your worth, your skills, and your fate. It's a world that is very possibly our own world, drastically changed on a fundamental level by centuries of destruction and eventual recovery. But the focus is not on the past here, but on the grim present, where those with Silver blood rule the Reds and subjugate them with hereditary powers: abilities to manipulate metal, to control fire, even to conquer minds.

As regular red-blooded humans, Mare and her family live a rather hardscrabble existence—not on the level of the Hunger Games, but not too far off. Young people who aren't able to land a job or apprenticeship are drafted into the legions of their country of Norta and sent to the border to die fighting the neighboring Lakelanders. When Mare's best friend Kilorn finds out he's to be drafted, her whole life feels like it's falling apart—she's already lost brothers to the war, and her father was left without the use of his legs.

After Mare is sent to the Silver capital in a job as a servant, she is hoping to help keep her family safe and fed, but instead, something completely unexpected happens: she finds out she has some powers of her own. And she might not be the only one. It's a discovery that could tear apart the fabric of their strictured society—but not if the Silvers can help it. 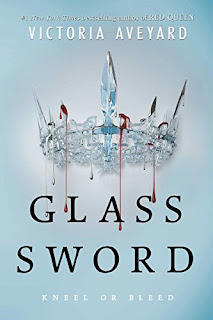 Observations: The synopsis above is how the story starts, but these events set in motion a movement of Reds that fuels the entire trilogy. Mare is whisked into a world of Silver nobility and made into a pawn for multiple sides of the struggle, while still hoping to keep her family safe. Not only that, she discovers that the Silvers themselves aren't universally amoral and evil—and her feelings for a Silver prince make things particularly complicated.

Mare's story ramps up throughout the second and third books, and we find out that the struggles between Red and Silver aren't confined to Norta—things are changing throughout the world as they know it. This trilogy is definitely a sweeping epic on a grand scale, and the author doesn't ignore complex social ramifications and the interplay between countries, even if the action is primarily focused on one locale. 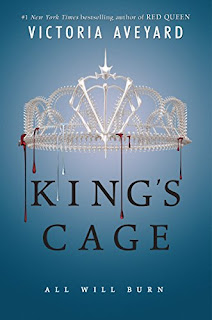 It's really impressive and tightly plotted, but the characters and their struggles remain central—the books don't get hijacked by the speculative fiction elements, which are wonderful and intriguing but (appropriately) are ultimately less important than the all-too-human motivations and emotions of the players themselves. These players—Mare, her allies, her enemies—nobody is wholly good or evil, and that makes for a believable and very gripping story with a lot of twists and turns.

Conclusion: Of course I WILL recommend this to fans of The Hunger Games, but also to any fans of postapocalyptic or dystopian fiction, as well as fantasy about paranormal powers. The blurb on Amazon calls it Graceling meets The Selection, so I guess there's that, too.

I received my copy of this book courtesy of my library's ebook collection. You can find RED QUEEN, GLASS SWORD, and KING'S CAGE by Victoria Aveyard at an online e-tailer, or at a real life, independent bookstore near you!
Posted by Sarah Stevenson at 8:00 AM
Labels: Adventure, AF, Fantasy/Sci-Fi, Post-Apocalypse Fiction, Reviews