Bullying was a problem in middle schools in the dinosaur years when I was there, so it's not like it's a new phenomenon. However, the "just ignore them and they'll leave you alone" school of thought has finally wised the heck up (and not before time, either) and since about 2006, after the film "Mean Girls" had its success, a new wave of middle grade books has begun to explore some of the more painful realities of living with the dichotomy of "being yourself" while being assured by your peers and classmates that your "self" is unacceptably and irreparably flawed.

Because middle school to high school is a time of immense pressure and personal development, these books are necessary, as social media and its adjacent technologies are giving sadistic little bullies more and more access to peers at an earlier and earlier age. Now that it's become even more obvious that adults are finding their strength in bullying (you needn't look too deeply into our politics to see that link), books which examine the painful and individual repercussions of being bullied are more important than ever. Bullies suffer from an unwillingness or inability to recognize or identify with the feelings and needs of others. They won't be able to learn to act with empathy until they more clearly see the results of its lack. One cannot heal what has not been revealed.

Granted, this is hard for some adult readers to grasp. Complaints that a book is "too sad," "dark and depressing" or "guilt-inducing" are unfortunately common when less mainstream (privileged?) characters are presented in fiction. Fortunately, through the auspices of adults with a little more emotional range who are , the kids who need these books find them. All it takes, adults, is decentering your feelings on the matter, and realizing that there's always at least one child who takes refuge in books because they really don't fit in. And these stories of kids who are sad but surviving can be the path through the jungle, the maps to the treasure, the how-to-deal manual that every kid needs. With that in mind,

In one day, four lives weave together in unexpected ways. Virgil Salinas is shy and kindhearted and feels out of place in his crazy-about-sports family. Valencia Somerset, who is deaf, is smart, brave, and secretly lonely, and she loves everything about nature. Kaori Tanaka is a self-proclaimed psychic, whose little sister, Gen, is always following her around. And Chet Bullens wishes the weird kids would just stop being so different so that he can concentrate on basketball. They aren’t friends, at least not until Chet pulls a prank that traps Virgil and his pet guinea pig at the bottom of a well. This disaster leads Kaori, Gen, and Valencia on an epic quest to find the missing Virgil. Sometimes four can do what one cannot. Through luck, smarts, bravery, and a little help from the universe, a rescue is performed, a bully is put in his place, and friendship blooms. The acclaimed author of Blackbird Fly and The Land of Forgotten Girls writes with an authentic, humorous, and irresistible tween voice that will appeal to fans of Thanhha Lai and Rita Williams-Garcia. 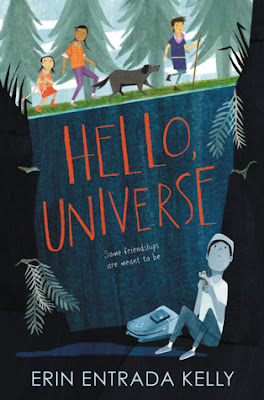 One of the things easily apparent in Erin Entrada Kelly's books is the link each character has between the present and the past. Like a string at the end of a balloon, each needs the other to keep the story grounded. In BLACKBIRD FLY, Apple Yengo reaches back to the past both with the Beatles' music, and with what she's literally holding onto from the past; something she believes belonged to her late father. These things, brought together into the present, help give Apple the wings she needs to fly. In THE LAND OF FORGOTTEN GIRLS, Soledad and Dominga hold onto their mother through sharing the fantastical tales of Auntie Jove. Soledad also holds onto Amelia, her late sister, through the whispering of her own conscience. In HELLO, UNIVERSE, Kelly takes a slightly different approach, stretching each character to reach toward something bigger than themselves for comfort. This is both grounding, and a means of expanding the character's worldview.

The deeply shy Virgilio clings to his guinea pig, and to his Lola's myriad tales of boys who get eaten by rocks and crocodiles and girls who ask so many questions they have to travel the world to find their destinies. Through his imagination, a starring character in a story speaks back to him from his deepest despair, reminding him that he is a hero, and that the worst thing he can do is give up. Independent-but-lonely Valencia, whose parents love her without understanding her, looks to the natural world as a larger organism to absorb and make unimportant the isolation she endures. The psychically inclined Kaori opens herself to dreams, crystals, portents, spirits, and the universe to guide her steps (even when opening her eyes to the here-and-now might help her a bit more), and even self-aggrandizing Chet frequently imagines himself a big, important hero like his father - not a truly larger-than-life guide through the world, but a familiar one.

This imaginative reach is also a survival tool, perhaps the best survival tool of all. Looking outside of themselves saves each of these children. Soledad has a strong, battle-cry of a name, but she is so lonely and isolated in her silent world that even religious solicitation at seven-thirty in the morning isn't viewed as something entirely horrible - besides, she's always open to learning a new thing, and maybe that church is interesting. Being open to finding out makes Soledad unique. Seeking an outlet for both her nightmares and her prickly moments with her mother, she unexpectedly finds Kaori... whose sense of wonder about life, the universe, and everything spurs her to be useful to many different people - even though Kaori only has two clients and one little sister in her sphere of influence so far. Despite having only her little sister for company, Kaori is never lonely, and never bored, because the universe is right there with so much to teach her, despite her parents preference for TV, March Madness, and earthbound concerns. Virgilio, the family turtle, constantly compares himself to his louder, livelier family, and it is his rich imagining of one of Lola's characters that sees him through his time alone in the woods. (Of course, that also plays against him a bit, since Radu is there, too.) Chet whistles in the dark by imagining himself a conquering hero... and in the end, his imagination of what the words "you'll regret it" mean just maybe will set him on a better path. We'll never know!

Far from guilting or making sad the children who read these books, this quiet story of a summer day in which four kids become better known to each other hits that sweet spot of being intriguing and well characterized while still leaving room for readers. Real life kids will draw conclusions, make assumptions and guesses and write their own "and the next day" hopes for these characters. And then, hopefully, they'll take the tools to reach out that the characters have set before them - a ladder, a handful of stones, a pink jump rope, a notebook - and go out and find their own way through the vast universe.


I received my copy of this book courtesy of the public library. You can find HELLO UNIVERSE by the inimitable Erin Entrada Kelly at an online e-tailer, or at a real life, independent bookstore near you!

This one sounds lovely! I will definitely be checking out her books next time in the mood for some MG. :)