TURNING PAGES: A WAKE OF VULTURES by LILA BOWEN

To begin with, this isn't a YA novel. It's a crossover adult novel, recommended for older YA readers due to some violence and disturbing interactions and attitudes. Lila Bowen is a pseudonym for Delilah Dawson, a familiar YA author. If you like stories of the Old West and enjoyed Moira Young's BLOOD RED ROAD or Patrick Ness' CHAOS WALKING series, you might find you really enjoy this. I honestly didn't think I would like it. Frankly, Westerns - the whole "cowboys and Injuns" thing -- is so problematic as to have been leeched of any enjoyment. But, I found this book sneakily got in under my radar, and I was riveted. It's weird as heck and oddly ...fascinating.

Summary: Nettie Lonesome has put away her femaleness, because what good does it do her? Having observed covertly, she knows females get to be only wives or whores, and she's not into either role. Half Native, half black, she lives as not-quite-a-daughter, but not-quite-a-slave, in a strange halfway place on a hardscrabble farm outside of town. Until one night, a well-dressed stranger insinuates himself onto the property -- intent on taking the one thing Nettie has that's hers. She's not going to let him, of course. An uncommonly strong girl, since she's the only one on the farm who works, Nettie fights for her life -- and nothing stops him, until by chance she hits him in the chest with a spike of wood... and then he turns into cold black sand and an empty suit of clothes with a hole in the shirt... Wait, what?

Even without the evidence of a body, anybody even half Black remotely suspected of doing violence to a white person is going to hang. Nettie makes tracks -- shoving her braid under the man's conveniently abandoned hat -- to the large ranch up the valley - because the lazy slobs for whom she works will miss her and raise a fuss... but they're not that bright. Posing as a boy called Nat and getting work is easy enough, but violence is following her - violence, and the spirit of a wet horse. There's something Nettie has to do to now -- some deaths to revenge -- and she has to keep moving, before the violence in her past overtakes her, and ruins her future.

Peaks: The setting was really amazing, and one of the best things about the novel. The author wrote that she binge-watched "Lonesome Dove" when she was a kid. It shows; the Western sitting just sings. The magic is bizarre and weird and it works. And, Nettie isn't just a girl, she's a girl who sometimes feels like a boy, who sometimes likes boys, who sometimes likes girls. She isn't a slave, she's not only Native, but both. Her identity is fluid and unsettled, and while everything surprises her for awhile, she unsentimentally just accepts what is, and moves on. Mostly. Eventually. She's funny and kind of abrasive. 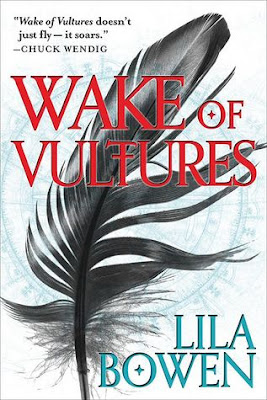 Nettie is also angry - furiously so - and terrified. Having been treated as garbage her whole life, it's hard for her to come to grips with change, and with trusting the people she must trust to do the things she must do. WHY did her parents abandon her? WHY was she being raised by awful, abusive people who basically kept her as a slave? Why is she being hunted and haunted and tracked across the world? The big question of "why me," which we all ask so often, is answered in an unusual way. Though a kind of Bildungsroman for Nettie, as the story deals with her becoming and accepting herself the way the brother-and-sister duo with whom she travels accepts her, this novel is also fast-paced and gallops along through the empty desert in a really enjoyable way. Imagine a kind of folkloric Louis L'Amour with a female lead and chupacabras. Good times.

Valleys: Though the use of the word "Injun" and "Indians" appears frequently, the author deals respectfully with her Native characters, having made a commitment to diversity which I applaud. I am always leery of books which drag out folklore and characters from a culture which don't belong to them, but Bowen makes an attempt to do her best to research and describe things with accuracy and knowledge. Nettie is described as likely half-Comanche, according to the author in her notes, while Dan and Winifred are Chirichahua. The characters from Comanche myth, the skinwalkers and two-natured folklore she discovered through research. She also apologizes in advance for what she didn't get right.

Conclusion: This is a weird and wonderful first book in a new series, and I loved how it ended - you could stop with this book and be happy, because this adventure is over, with no cliff-hanger. However, it's a lovely thought to think there will be another strange and wild book late next year!


I received my copy of this book courtesy of the public library. You can find A WAKE OF VULTURES by Lila Bowen at an online e-tailer, or at a real life, independent bookstore near you!

Posted by tanita✿davis at 3:25 AM
Labels: Crossover, Dystopian, Ethnicity and YA Literature, Fantasy/Sci-Fi, Gender & YA Lit, Magical Realism, TSD Review