Monday Review: THE BEGINNING OF EVERYTHING by Robyn Schneider 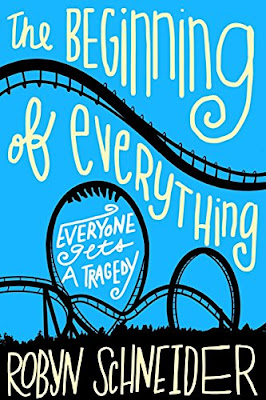 Summary: It takes some serious stones to start a story off with a decapitation. But I don't think it's too much of a spoiler to say that, yes, in some ways that WAS the beginning of everything for narrator Ezra Faulkner. It wasn't fatal for HIM, obviously, but that day when he and his best friend Toby were twelve years old and witnessed something horrific and gruesome was the day their lives were changed forever. And, life being the way it is, it wasn't the last life-changing moment, either.

Fast-forward about five years. Ezra and Toby aren't close any more. Ezra, in fact, is kind of the King of School these days—varsity tennis champ, popular crowd, keggers every Friday night, and so forth. Until one night, he leaves one of his tennis teammates' keggers and his car is hit by another vehicle that blows a stop sign. His leg is shattered, as is his tennis career, and he finds out how easy it is for everything he knew in his comfortable life to fall apart.

Don't get me wrong; this isn't the kind of story where the narrator's life does a total 180. One of the things I like about this book is that the changes are realistic and believable. Ezra may not have a picture-perfect family life, but he has a comfortable upper-upper-middle-class existence to fall back on. He may have lost his brawn, but he actually does have brains and is fine with using them, especially now that his free ticket to college is kaput. And, after all these years, he has his friend Toby. They haven't been close, but they've stayed on decent terms, and now Toby's got what Ezra lost: a group of loyal true friends and a sense of his own core self. And so, what seemed like the end may in fact be another beginning. Especially when the new girl, Cassidy, comes along…

Peaks: Like I said, I enjoyed the fact that the life-changing moments in this story were believable and human-scale, and didn't go all the way over the line into Major Tragic Emo. Those types of stories don't appeal to me and I generally don't read them. I guess I prefer stories that deal with the everyday sorts of tragedies, the kind that might happen to someone you know—the kind in, say, a Sarah Dessen novel.

I also got a lot of pleasure from the depiction of the Southern-California setting in this book. I've written about very VERY similar settings because it's where I grew up and went to high school—not quite in the OC, where this story takes place, but basically 30 minutes east. The palm trees decorated with Christmas lights, the Santa Ana winds, the ability to drive out to the beach or into L.A. in about an hour, give or take…it's a very particular growing-up experience, and it was portrayed well.

Valleys: If there are any weaknesses here, it's that some of Ezra's previous jock-and-cheerleader friends are sometimes a little two-dimensional, but having said that, the author does make sure that the most important characters are well-rounded—namely, Ezra's ex-girlfriend Charlotte, who is not simply a hot-mess megabeeyatch but a real person, albeit quite flawed.

Conclusion: I recommend this one for fans of the contemporary coming-of-age tale, done realistically, with a focus on friends and school relationships. Because the characters are high school seniors, there's definitely mature language and behavior—it's not a "young YA" story. Again, if you like Sarah Dessen, or (I feel like such a dork for tooting my own horn here, but I really did think about the similarities) my second book Underneath, I'd suggest picking it up. Good male narrator, so there's guy interest here, too.

I received my copy of this book courtesy of my library's ebook collection. You can find THE BEGINNING OF EVERYTHING by Robyn Schneider at an online e-tailer, or at a real life, independent bookstore near you!
Posted by Sarah Stevenson at 9:35 PM
Labels: AF, Guy Appeal, Problem Novels, Realistic Fiction, Reviews