TURNING PAGES: SILVER ON THE ROAD by LAURA ANNE GILMAN

Another Western with a youthful protagonist, Laura Anne Gilman's novel is the first in a sweeping new series. I read it -- passed it along to Tech Boy who also read it and said, "Wow, it just... worked." What's harder to say is... why. And we aren't the only ones - NPR's book reviewer had the same reaction: wow, this is cool, wonder what makes it so? In some ways, it's a simple Hero(ine)'s Journey adventure... and in other ways, not so much. This novel isn't marketed to YA, but can be considered another crossover for older readers not afraid of reading a book with big ideas and sturdy vocabulary, and who enjoy adventurous females who dream bigger for themselves than they imagined.

Summary: Izzy has turned sixteen, which means the indenture into which her parents sold her as an infant is... over. She's lived in the tiny frontier town of Flood in the Territory - the acres of land bought as The Louisiana Purchase in our world - for her whole life and worked for her keep in the Boss's gambling den and saloon, serving drinks, wiping up spills, dodging hands and making sure that the Boss knows what he needs to, in order to keep running an honest house. Oh, sure, she knows the gospel sharps - like card sharps, only they're kind of itinerant preachers who promise salvation and occasionally disappear with the offering plate - call him the devil, and she knows that he makes Bargains with everyone, and that they sometimes live - or don't - to regret them, but it's been a good, if safe and bland life. She could have more of the same, but... now that her indenture is over, she has... choices. She can leave Flood, go and see the world beyond - maybe someplace out of the Territory, like the United States. Maybe she can find her parents...? She feels there's a sense of ...something calling her to do something. Maybe it's just to know what's really going on, so she makes a Bargain that is both terrifying and exciting -- she signs up to work for the Boss, in hopes that she'll maybe someday work up to being his Right Hand in the business. Unfortunately what the Boss wants her to be is his Left Hand -- the one no one sees coming. He sends her off with a Rider - an itinerant lawman of sorts - called Gabriel, to learn the Territory, and to learn her job. But, Izzy -- or, rather more maturely, Isobel is still only sixteen. Sure, she's a canny sixteen, but what does she know about the wide-open spaces of the Territory and the monsters that live there? What does she know about sentient silver, dust-mad magicians, talking rattlesnakes, the Native dream walkers who don't speak and their fellow tribesmen who appear and melt into the hills without a sound? All she knew was the saloon -- but Isobel is discovering that there's a whole big world out there, and the Boss needs her to take her place... or live to regret her Bargain like all the rest. 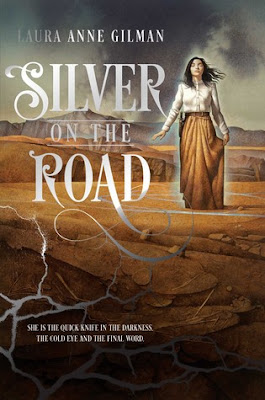 Peaks: The worldbuilding here is immense. Just a discussion of the magic and the monsters in the Territory could take me an hour. The setting of the Old West is often, as I've said, problematic, but Gilman escapes a lot of the nonsense of "cowboys and Injuns" by simply rewriting history and highlighting some crucial differences. First, in this new version of the American expansion, the Native tribes haven't been lied to and betrayed, because The Devil's Agreement, by which the Boss holds the Territory, doesn't take from the Native people but is a literal agreement, with signatures and boundaries and law. As is often said, the devil runs an honest house. Second, the skirmishes between settlers and Native persons aren't part of this history, as the Native people have no need of the settlers nor need to constantly defend themselves and their lands, and the settlers know their place -- as immigrants. This means that the two groups have not much to do with each other, which is a happier fate all round. Third, the settlers aren't city-slickers from the East; in this version, they have come from Spanish held Mexico and parts Southeast, which means that their languages, religions and myths are vastly different. It's delightful, really.

Isobel is walking into an adventure in the grandest tradition of adventures, but she's also having to stand alone, as a single girl in the adult world. She may have the Boss behind her, but out on the road, she's the one to stand down monsters and magicians and horrible encounters with them that lead to ghost towns. She is, as she is named, the quick knife in the darkness, the cold eye, the final word. She has to do what has to be done... but how do you learn to do that? This book is about that, too. And immigrants, and political power of churches. And faith. And magic, and mystery. It's just a huge book, and I'm really glad to see that it's going to be a series.

Valleys: Honestly, I'm still just dazed at finding myself finished with the book... I really found I couldn't find valleys. It's nice to read a book where the storytelling just draws you in that quickly.

Conclusion: Though this is the first novel in a series, it ends as if it's the entire story told - which is a lovely extra. Isobel is a confused, conflicted, resentful, hopeful, frightened girl who is just driven to do a good job, and teen readers will relate with her desperate desire to be seen as an adult and capable, and not one of the kids anymore. I am eager for the next book in this series.


I received my copy of this book courtesy of the public library. You can find SILVER ON THE ROAD by Laura Anne Gilman at an online e-tailer, or at a real life, independent bookstore near you!

Good post. I just bought the eBook edition because of this.

@Gail: I really hope you enjoy it! It was so outside of my experience it just yanked me in and held me through the wild adventure. Really enjoyed it.