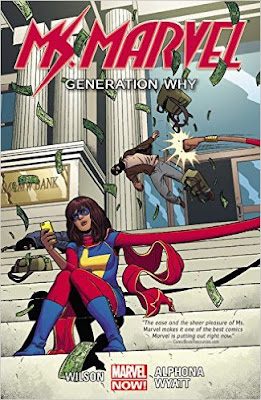 Summary: Some time ago I reviewed the first collected volume of the new (and surprisingly awesome) Ms. Marvel comic, starring the rebooted main character Kamala Khan: an ordinary American teenage girl from Jersey City who just happens to be a Pakistani-American from a Muslim family. As someone who has Muslim family (my dad's side), I was thrilled to see a realistic, sympathetic, and positive portrayal of American Muslims, and in today's social climate it's something we need more than ever. So I was happy when my friend Ross lent me the next volume in the graphic novelization, entitled Generation Why, which collects issues #6-10 and covers Ms. Marvel's continuing adventures defending her city from the mysterious giant-robot-building villain known only as The Inventor.

Peaks: There is so much to love about this comic series—and this is coming from someone who is admittedly not a huge fan of superhero comics in general or of Marvel characters in particular. Sorry; I guess I've just always been more of a DC girl (Vertigo, if you must know.). Anyway, one of the storylines I DO like in the Marvel universe is the X-Men, and, lo and behold, there was a cameo appearance by He of the Huge Ackman, the Wolverine himself. This was a very cool part of an even cooler plot arc in which we learn more tantalizing hints about Ms. Marvel's origins, get to see her charming, heartwarming, often hilarious interactions with her family, and watch her bring all kinds of entertaining and clever smackdowns on The Inventor's giant homicidal robots.

This episode also focuses, for its moral message (because don't superhero comics usually have one? I find they do), on youth issues and the empowerment of the current generation beyond the stereotype of them being clueless, apathetic drones with smartphones grafted onto their hands. If you think about it, superhero comics have often been message-y, so I'm not going to pass judgment on that aspect because it just is what it is, but I will say that it's a message well suited to an audience of young readers, and I like the idea of this comic being able to appeal to a wide range of readers and interest a new generation in traditional comic-book heroes. Honestly, what's not to like? A butt-kicking girl hero, plenty of diversity, lots of humor and hilarity, and a giant, lovable, slobbering telepathic dog. Go read it.

One other thing which I didn't notice before that I just adored: Ms. Marvel's outfit. If you look carefully at it, it's actually a shalwar kameez, and instead of a cape she has a dupatta (shawl). It's pretty awesome, and it's featured prominently on the cover of this collection. The cultural aspects are well done, again, in this episode, and readers not as familiar with Pakistani culture or with Islam will see typical family interactions and learn, for instance, that dogs aren't considered to be clean animals you'd let live in your house. (This was a Thing when I was a kid, and as a kid who wanted a dog, it was not a thing I liked. However, having been to India since then, and seeing the sheer number of stray dogs all over the place, I kind of understand it more…) There's also a GREAT visit by Kamala to her imam at the mosque, who gives her very wise advice. Another really important scene, to me, given the number of people who have no idea what an imam really is or does beyond what they see on TV.

Valleys: I honestly don't see any real valleys to this one. There was a change in artist starting from issue #8, and I wasn't sure about it at first, but the new artist grew on me after a while. I guess if you're the type of person who has trouble with reboots, and can't cope with change, it could be hard to get used to. I was never much of a Marvel reader in the first place, so it bothered me not at all.

Conclusion: I really think comics fans should read this one. Girls, boys, grown-ups. It is just so much fun, and is a great reboot for reflecting the diverse time in which we live. Stay tuned for my review of Volume 3: Crushed, which is also in my TBR pile.

I received my copy of this book courtesy of a friend. You can find MS. MARVEL VOL. 2: GENERATION WHY by G. Willow Wilson, Adrian Alphona, and Jacob Wyatt at an online e-tailer, or at a real life, independent bookstore near you!
Posted by Sarah Stevenson at 11:15 AM
Labels: AF, Comix, Diversity, Fantasy/Sci-Fi, Graphic Novels, Multicultural Fiction, Reviews

This sounds fantastic! I've never been huge into comics, but your review makes me want to check this one out.