TURNING PAGES: FLIGHT OF THE GRIFFONS, by Kate Inglis, illus., by Sydney Smith

Rarely do I get something as absolutely delightful in the mailbox as the unexpected package I received all the way from Halifax this week. It brought news -- big news:

There are still PIRATES in the backwoods of Nova Scotia. Pirates -- and get this -- they're unionized. They're the T.H.U.G.S. -- the Treasure Hunters & Useful Goods Society.

"The people will pay with their whole being: physically, mentally, ideologically, spiritually, with their land, their soul. And not just country people. Not just native people. Poison will flow through villages, towns, and cities and not stop. We must rise up. We must disrupt the system. Capitalism is a deception." ~ Rasmus Krook

Reader Gut Reaction: This is an intelligent book, which makes it a big mouthful for middle-grade readers who are thoughtful and crave a challenge. This book is a smaller, more chewy mouthful to crossover adult and older teens, who take its beautiful turns of phrase and concepts of radical environmentalism, and mull them over, taking in hard truths and crunching them into smaller and smaller bits, until they're swallowed, and hopefully they lodge in the heart, and become a part of the reader.

No glossary, but crew lists here. Also, there is Swedish in this novel -- untranslated -- but through context (and the fact that our language loosely parallels its construction) it is perfectly comprehensible. The illustration, by Halifax-based author Sydney Smith, absolutely MAKES this novel. The water-color cover, the end pages, the evocative pen-and-ink interior illustrations -- we should ALL be so lucky to EVER have someone like him illustrate a novel in the States. The book layout, the heft and silken feel of the thing in the hand -- just makes it entire a beautiful and precious treasure, to be smuggled out to the treehouse - or onto the train in a purse - and to be savored. This is NOT a book to get in ebook form. No, no.

Another thing I loved about this novel is the diversity of work culture and gender. Girls are metalsmiths, scientists, or homebodies in this novel (or hopeful pirate captains). Men are both rowdy and loud, and quiet and careful; cooking, cradling babies, collapsing in despair -- the brashest of lunatics or the truest of friends (and good at picking locks). Some are mute, some, like Missy, are nearly deaf. Also, some of them are downright noisy, and burp a lot. 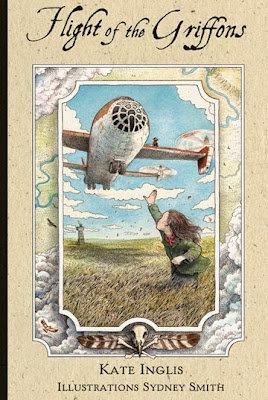 One tiny drawback for some readers will be that there are tons of characters - some may have a hard time keeping them straight, as they are all hardbitten Northerners, covered in plaid and grease. However! This is where the illustrations will save you, and there are also cultural and ethnic diversities depicted in characters as well (though I doubt one, Brock Jones, had a single line throughout the novel).

Loyalty to oneself and ethical ideals are at the heart of this brilliant and surprising novel. Environment, red tape, crime, capitalism, and survival are topics ably fielded alongside of faithful stewardship, friendship, and what makes a family. Though this is a companion novel to Princess-Bride sounding THE DREAD CREW, FLIGHT OF THE GRIFFONS is a standalone.

Despite the fancy name, the T.H.U.G.S. are still operating outside the law (I mean, pirates, duh), but they're carefully organized and wound up in paperwork. They're scavengers, these pirates but instead of pirating ships at sea, they operate land ships, convoys of massive trucks and chopped-up school buses, welded onto old logging trucks. They wear plaid, a lot of time, to blend in with the folks up North, but they're pirates -- salvage pirates, that is, and no one's metal or reusable, recyclable parts are safe, no old mine, railroad, airport or dumpsite will be left for government dismantling crews. Not if they can help it.

Though lawless is as lawless does; not even in the T.H.U.G.S. does everything runs smoothly. Not every lawless pirate wants to be tied up in paperwork, and sometimes there's complaining -- and outright rebellion. Chief B, who is the outfit's bureaucratic bun-haired dictator, puts down rebellions everyday before breakfast. Her spies are everywhere, and if you cross her, she sicc's the Royal Mounted Canadian Police on those who don't walk the straight and narrow. She's had a couple of ships under her beady little eye. Unfortunately, they're both crews known to Missy Bullseye.

Concerning Character: Since she was nine, and climbed into the window of the land-ship owned by The Dread Crew, a pirate -- with a ship of her own -- is all things and everything Missy has ever wanted to be. There are complications - Missy has never been to a traditional school, and is losing her hearing, and has to read lips and put information together as best she can -- but she's used to that. Before he died, her father made sure she could get along in the world on her own. She's fulfilling the regulations for her dream -- paperwork and such -- and Missy has been climbing up steadily through the ranks, serving her workterm on every ship, completing the requirements of her apprenticeship to become Union Certified. If she's to have her own ship, she must be accepted for probationary status as a member of the T.H.U.G.S., and she MUST be approved and certified...but, roadblocks are thrown in her way. Bureaucracy rears its brainless head in the form of paperwork and delays, and Missy fears she'll never see her dream come true. She's already thirteen! Time's a'wastin', if she wants to have that ship before she's old. And so, she agrees with Chief B., the T.H.U.G.S. petty, obsessive dictator, to take on a little job for her... a job that will get her probationary status, guaranteed, but one which doesn't leave her feeling exactly right. It's a job of finding and spying on one blacklisted, wildcat pirate crew called the Griffons.

Nobody's seen the Griffons, for way too long -- and their way of ignoring paperwork, letting their contract expire and dodging Chief B's justice has got her stomach in knots. It's her steely-eyed obsession to bring them in, and bring them down. No one messes with Chief B. -- No one. And, Missy -- ready to do anything for her apprenticeship -- finds herself owned. She wants that certification too much to say no... An able spy, though she's just a tough little string of a girl, Missy actually finds the Griffons, all right -- but she also finds the grasslands, the loudest drums she's ever heard, new friends, and new challenges and a whole new world. Suddenly, Chief B.'s justice doesn't look right, and doesn't seem worth it. Suddenly, Missy's on the wrong side of everything she ever wanted to be. After all, who's to say who is walking the straight and narrow, when it comes down to it? Who's to say what Missy wants is more important than what the whole world...needs?

If you're looking for a thoughtful, fast-paced, mad-cap, entertaining novel which will delight you, pick this up. You will not be disappointed, and you'll come away thinking - which is never a bad thing.


I received my copy of this book, courtesy Nimbus Publishing. You can find FLIGHT OF THE GRIFFONS by Kate Inglis online, or at an independent brick-and-mortar bookstore near you!

Oh, Tanita, thank you ever so much! I just tripped over this entirely by accident, searching for something else, and I am amazed at how quickly and how thoroughly you shared your thoughts on the book. This is the first review I've seen, and I'm so profoundly impressed by all your reflections.

You've reminded me to save up to hire Sydney for a Crummies crew list as well, perhaps for the second edition and to release online. Eli Bottom is an African American character - the jury rigger for the Crummies who picks up and teases Missy in Ontario - and so is Norah Preston, their electrician. She's named after East Preston, the first free black town in North America (it's here in Nova Scotia). Brock, the Griffons' wireman that you noted due to the illustrated Griffons roster in the book, is one of several characters who just happened to be one of the quiet ones, in my head, along with many others of many different backgrounds on both crews.

It's such an interesting journey, the ones who step forward and wind up having a voice. But your feedback on keeping the characters straight is really lighting a fire in me to offer as many doughnuts and gold coins as I can to Syd to get just one more crew roster out of him. :)

I am so thrilled today! Thank you for being one of the very first people to finish the book, let alone offer such a colourful and excellent commentary. It means so much.
Kate Inglis

@ Kate Inglis: YOU ROCK!!!! Thank you for such a smashing book.
What fun that mine is the first review you've read! Joy to you, and may you write more and more. This is a superb, truly superb adventure, and I really enjoyed it! Again, thanks!