Monday Review: THE CRACKS IN THE KINGDOM by Jaclyn Moriarty

I devolve to such a squealing fangirl when it comes to Jaclyn Moriarty. I think everything she does is brilliant and we've made no secret around here of our admiration for her writing (cf. the gushing fan letter we wrote for One Shot World Tour: Aussie Day some years back) and her amazing ability to blend seriousness and humor into a story that touches your heart at the same time you're rolling on the floor laughing. 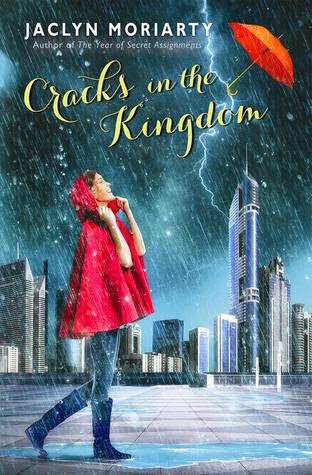 When A Corner of White (The Colors of Madeleine, Book 1) came out last year, Tanita and I both had to have our say in reviewing it (mainly because I forgot she had already reviewed it, so I posted my own…such things happen, and certainly, we don't have a rule against it; we just try not to repeat each other too terribly often, given the overlap in our reading tastes). Anyway, with A Corner of White, we were both captivated by its originality in depicting the idea of an Alternate Universe Much Like Our Own (but different in critical ways) and in the very literary resonance between the spec fic elements and the stories of the characters themselves.

This unique balance continues in Book 2, The Cracks in the Kingdom, which I was so excited about I had to have it RIGHT AWAY and therefore did that Kindle Buy It Now thing that I try not to abuse because it is just so easy.

So. I don't want to give away too many spoilers, plus it's not a story that lends itself to easy explanation (see Tanita's review)—but The Cracks in the Kingdom brings us back to the intertwining stories of Madeleine, who lives in the World (our world, that is) and Elliot, who lives in the Kingdom of Cello, which exists kind of…sideways to our world. The two communicate through a crack in reality, slipping notes to one another. Now, though, the need is desperate to actually widen that crack into something more. Princess Ko of Cello has discovered the secret behind her missing royal family, and that secret (don't worry, this isn't really a spoiler) is that they have been somehow spirited away into the World, and have forgotten who they truly are.

The Princess gathers Elliot together with a group of other exceptional young citizens of Cello to form the Royal Youth Alliance, ostensibly a means of improving relations between the various parts of the Kingdom, but in fact it is a front for tracking down and finding a way to return the royal family to Cello before all diplomatic hell breaks loose.

Meanwhile, Madeleine continues to try to cope with her conflicting feelings about Cello, and whether it even really exists. Elliot, on his end, has everything at stake in the effort to convince her it's all true—but of course Madeleine, who has her own issues to cope with, begins to wonder if she's simply coming unglued. And the possibility that she ISN'T—that it's all real—is not exactly any less frightening.

This might sound like it's all stress and tension and adventure, but it wouldn't be a Jaclyn Moriarty book if it didn't also crack you up at least once per page, and it does that, too. The characters are each so real, so distinct, so likable and hilarious and multifaceted, and as always with her books, they drive the story, and they make you believe the unbelievable.

You can find The Cracks in the Kingdom by Jaclyn Moriarty online, or at an independent bookstore near you!
Posted by Sarah Stevenson at 11:53 AM
Labels: Adventure, AF, Fantasy/Sci-Fi, Magical Realism, Reviews, Romance