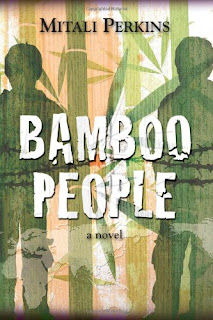 I purchased a copy of this book.

Reader Gut Reaction: There's an immediacy to this story, and a clarity of detail, that made it easy for me as a reader to relate to the characters, even though we're immediately plunged into a setting that won't be a familiar one for most people—modern-day Burma. Because we start with Chiko, and Chiko's a fellow reader and book lover, there's something we can immediately cling to amid the unfamiliar welter of sights, sounds and smells. He's our anchor, and his strength of character helps sustain the reader, too, as we follow him through his forcible conscription and into an army training camp with dozens of other young men.

Concerning Character: Chiko is such a sympathetic character with relatable needs and desires, and I was easily drawn into his day-to-day relationships with his mother and their family friends. This made it easy to identify with him, despite the fact that life as a teenager in Burma is so different from teenage life in America. And, later, when we switch to Tu Reh's point of view, I felt quickly brought up to speed on life as an oppressed ethnic minority desperately trying not to fall into the cracks. Both young men are willful and determined, but where Chiko is quiet, Tu Reh is angry; where Chiko is book-smart, Tu Reh is cunning and desperate. The author skillfully brings the two together in a way that heightens both their differences and their similarities; she puts them in a situation that tests their mettle and calls upon them to make difficult decisions about what kind of people they want to be.

Recommended for Fans Of...: Stories of real-life wartime in other countries, like Nancy Bo Flood's Warriors in the Crossfire. Books about the lives of young soldiers, like Walter Dean Myers' Sunrise Over Fallujah, Flygirl by Sherri Smith, or Mare's War by our own Tanita Davis.

Themes & Things: This is, in great big capital letters, a Coming Of Age Book—both characters are forced into a situation that ends their childhoods early, that brings into stark relief the question of what kind of adults they want to become. Tu Reh makes a difficult choice between revenge and mercy, between seeing the enemy as "them" or as individuals. Meanwhile, Chiko learns that his inner strength and innate kindness and open-heartedness are just as effective tools in his survival as the outer strength he develops in the army training camp.

Authorial Asides: I was so impressed by the seeming ease with which the author brings us into the lives of these young men, and paints a picture of what it means to survive in today's Burma—not something that many readers will be familiar with. And I was riveted by both young men's personal journeys, as well as by their tense and suspenseful circumstances. Great work, Mitali!

You can find Bamboo People at an independent bookstore near you!
Posted by Sarah Stevenson at 12:55 PM
Labels: AF, Multicultural Fiction, Realistic Fiction, Reviews

This one's been on my to-read list since I finished SECRET KEEPER. Thanks for reminding me while I've still got Christmas money left over! =D Great review!

Thanks, Maggie, for stopping by and commenting! I still need to read SECRET KEEPER, I'm sorry to say, but I'm looking forward to it very much.