A Review In Memoriam: Flash Burnout by L.K. Madigan 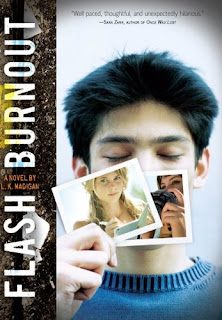 Reader Gut Reaction: I wish I'd read this one sooner, and I wish I'd had a chance to know the author* who created such an absorbing, quirky, funny, sad, very real story. The details about photography were a lot of fun (of course, I'm an art nerd, so of COURSE I liked that) and the quotations from photography books and manuals were a great way to set up each chapter, as they complemented the story in a sort of lateral way.

Concerning Character: It was the characterization that hooked me in this story. I was really impressed with the author's portrayal of Blake as a convincing, well-rounded, and sympathetic teen guy narrator. Blake is a good person, but he's realistically flawed, too. Even for a reasonably insightful guy like him, sometimes it's hard to figure out what to say, what to do. I also loved all the side characters—his girlfriend Shannon, who is perfect for him in so many ways but is herself only human; his friend Marissa, whose friendship starts to get awfully complicated; his sometimes-sympathetic, sometimes-aggravating older brother Garrett. I think I loved his family most of all. They're a happy family, a family who gets along well and loves one another without being too good to be true—in stark contrast to other families shown in the story, and frankly, in stark contrast to the glut of troubled families that saturate the YA literature market.

Recommended for Fans Of...: Stories about coping with family difficulty like Blythe Woolston's The Freak Observer, which, similarly to Flash Burnout's use of photography how-tos at the beginning of each chapter, includes physics principles and problems as an accompaniment to the story. Also recommended for fans of Barry Lyga's smart, reflective male narrators.

Themes & Things: Blake makes a good teenage Everyman. He's a nice guy, he tries to do the right thing, but like most of us, when things start to get complicated, it's hard to sort out your thoughts and zero in on the right thing to do. And sometimes you mess up. Good intentions vs. imperfect behavior, friendship vs. love, conflicting loyalty, the meaning and responsibility of family—these are all themes that drive the story.

Authorial Asides: Everything in this story is very tightly set up from the very beginning, from Blake's at-times-tense relationship with Shannon, to the stress in Marissa's family life, to Blake's mildly adversarial relationship with his brother. Each of these relationships changes and develops over the course of the story in ways that are natural without being too predictable. It was well crafted from both a plot and character standpoint. I liked it that his brother Garrett had a life (and a subplot) of his own that created a sort of complementary backdrop to what was happening in Blake's life without taking over the book.

*For more on the author or to contribute to the fund her family has set up for her son's college education, see our posts here and here.

You can find Flash Burnout at an independent bookstore near you!
Posted by Sarah Stevenson at 11:29 AM
Labels: AF, Guy Appeal, Realistic Fiction, Reviews

This book is in my pile to read. Like you I wish I would have read it earlier. Though I didn't know Lisa, my heart aches for her family.